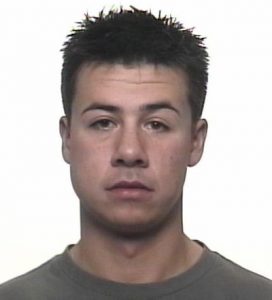 Winnipeg police are looking to locate a man accused of pointing a gun at two women inside a home on Saturday.

Police say Roy Christopher Brandson, 36, forced his way into the residence in the 3000 block of Sinclair Street and threatened the victims.

He is described as Caucasian, approximately 5’10” in height, 160 lbs with a medium build, brown hair and brown eyes. He may be driving a white 2002 Ford F-250 extended-cab truck with the licence plate of FSY 839.

Police believe Brandson may be in the Winnipeg, Lundar or Eriksdale areas and is armed with a firearm. The RCMP is also trying to locate him.

Winnipeg police say the public is warned not to approach Brandson. Anyone with information on his whereabouts is asked to call 911. Police can also be contacted at (204) 986-6219 with information relating to the case.