‘Hipster’ Nativity Scene in Montreal Doesn’t Please All the Faithful

By Giuseppe Valiante, The Canadian Press 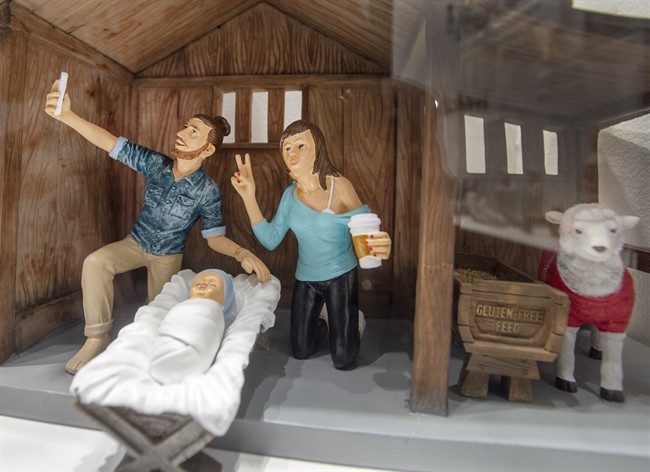 A “hipster” version of the Nativity scene is displayed at Saint-Joseph’s Oratory’s museum Monday, December 10, 2018 in Montreal. The Oratory is not selling the controversial item in its gift shop. (THE CANADIAN PRESS/Ryan Remiorz)

MONTREAL – A Nativity scene inside Canada’s largest church asks the question, what would Joseph and Mary do if Jesus were born in modern times? The answer: take a selfie and flash a peace sign.

A controversial depiction of Christ’s birth on display at Montreal’s St. Joseph’s Oratory reflects western society’s embrace of technology, healthy living and the self.

Joseph and Mary are posing next to the baby Jesus for a selfie — presumably to boast how their child is the son of God, as opposed to all the regular babies on their friends’ social media feeds.

Next to the manger — which is topped with solar panels — are the three wise men on Segways, holding boxes that are conspicuously similar to the packages of the online retail giant, Amazon.

The innkeeper, who in the biblical account rents the manger to Joseph and his pregnant wife, is fixated on his handheld digital screen and wears headphones that would drown out news of the miraculous birth.

“Feelings are mixed,” said Turbide, whose museum is located inside the historic oratory on the flank of Mount Royal.

So much so that the museum had to place a disclaimer next to the scene in order to calm unhappy visitors.

“The museum is aware that the appearance of this creche has raised some concerns,” it reads. “Far from being irreverent, this creche is intended to make us smile.”

St. Joseph’s Oratory has about 1,000 Nativity scenes from about 100 countries, Turbide said.

What she called the “hipster creche,” first displayed in 2017, is part of the church’s permanent exhibit of Nativity scenes from around the world.

Turbide said that while the scene is certainly provocative — for example, Mary has a bare shoulder and bra strap exposed — it is customary for Nativity scenes to be interpreted around the world according to local customs and cultures.

She pointed to a scene from Africa, where the usual cow and donkey are replaced by a giraffe and zebra next to the baby Jesus.

“This one doesn’t have a donkey,” Turbide said, “but it does have a cow, stamped with ‘100 per cent organic’ on its backside.”

Francois Trudel, 74, who was visiting the oratory Monday, said he very much liked the scene.

“Jesus didn’t live just for the first century in which he was born,” he said. “He lived for eternity. The creche shows to what extent man is intelligent. It shows what God put inside him and how those tools progressed to make life better.”

Dinara Salaeva, 27, who was visiting from Toronto, said she didn’t think the scene was appropriate.

“I’m agnostic, but I still respect everything related to the Bible and the images,” she said. “So when I see that, I feel like it’s not necessarily mocking, but maybe it’s a little disrespectful of other people’s beliefs.”