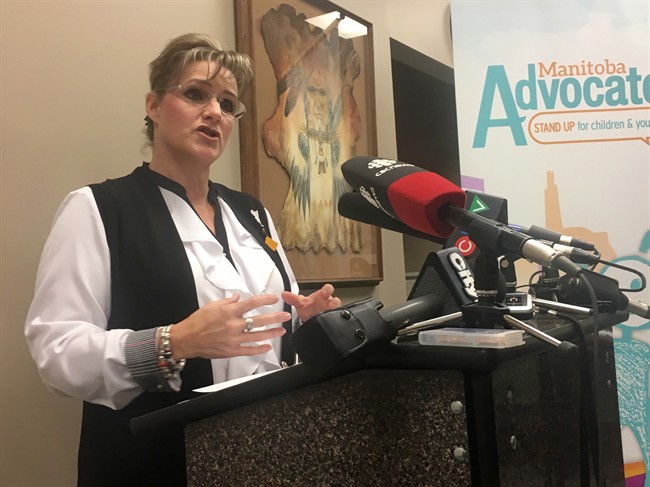 WINNIPEG – Manitoba’s advocate for children and youth says a girl who suffered repeated sexual abuse and died of a drug overdose was failed over and over again by the province’s child welfare system.

The girl — identified only as Angel — was born to a mother with addiction issues and was apprehended by social workers 14 times by the time she was 12, says a 118-page report from Daphne Penrose released Thursday.

But each time, the girl was returned to her mother without a proper assessment of the home and without supports for the family.

“The (child and family services) agency conducted no meaningful assessments as to whether Angel’s mother was ready or able to provide safe care to Angel. So inevitably, Angel would be returned home, left in the risky situations, and when the risk became so sufficient, she was reapprehended again,” Penrose said.

“When she was in care, CFS did not complete any long-term planning and did not demonstrate an understanding of their legal mandate to protect and provide for Angel.”

The report does not identify the agency responsible, but says it was one governed by the First Nations of Northern Manitoba Child and Family Services Authority, and handled Angel from the time she was two through to her death. About 90 per cent of kids in care in Manitoba are Indigenous.

Penrose, an independent officer of the legislature, makes six recommendations in her report, including a call for greater oversight to ensure agencies are meeting minimum standards.

Angel was sexually abused the first time when she was 21 months old, the report says. When she was seven, her family was waiting for housing on a reserve and living at a healing centre. While her mother was out, another resident watching over Angel fell asleep and a third resident came into the room and sexually assaulted the girl.

Angel dealt with her childhood trauma by acting out, Penrose said. She numbed herself with solvents and attempted suicide at age 11. She was later forced into the sex trade, became addicted to drugs and died of an accidental overdose in 2015 at the age of 17.

She was living in a foster home at the time, having been made a permanent ward of the state two years earlier. The report says RCMP and community members raised concerns about the foster home, but the agency stood by it.

“In Angel’s case, the public systems that should have protected her did not,” Penrose said.

Penrose is also calling on government, police forces and others to expand outreach programs for exploited youth and to raise public awareness about the “relentless” sexual exploitation of children and youth.

“As a community, we all have a role to play in making sure that people understand that … sexual exploitation is a violation of children’s human rights and we need to stop it from happening.”

The report also calls for expanded mental-health services, specifically addressing childhood trauma and addictions. It can be hard to get a child into treatment, and even those going in voluntarily can find themselves turned away outside office hours, Penrose said.

Government officials said they had not yet read the report but would review it.

Premier Brian Pallister said while the federal and provincial governments continue to transfer authority over Indigenous children in care to Indigenous authorities, the top priority must be children’s safety.

“As we move in those directions to empower communities, we must make sure the safeguards are there, that the children are protected through this process. That should always be our first concern.”