By Alex Cooke, The Canadian Press 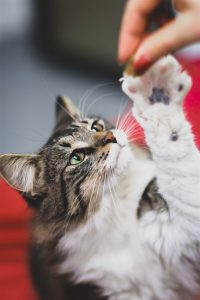 A cat is named Baloo is shown in a handout photo from the Montreal SPCA. (THE CANADIAN PRESS/HO-Montreal SPCA MANDATORY CREDIT)

HALIFAX – A Halifax-area woman played a stressful game of cat-and-mouse earlier this month, not knowing that the missing pet she was frantically searching for had been accidentally shipped to Montreal.

Jackie Lake says her cat, one-year-old Baloo, snuck into a box and nestled in for a catnap while she was boxing up some tire rims to send to a friend in Alberta.

“The cat never made a sound. I’m telling you, he was in stealth mode,” said Lake in an interview.

Not knowing that her pet was inside one of the parcels, she shipped it off on Thursday, Dec. 6. The next day, she realized Baloo was missing.

Thus began a panicked search of the neighbourhood, where Lake and her three children spent the weekend hanging up posters, setting out bowls of food and knocking on doors.

“He always tries to escape, he loves the intrigue,” said Lake, explaining that they believed the cat had simply gotten outside.

So she got quite a shock when she got a call from Purolator on Monday, and learned the cat had been discovered 1,200 kilometres away at a facility in Montreal.

“I mailed a cat!” she said. “I literally started bawling and screaming into the phone, ‘Did I kill my cat?'”

Luckily, Baloo was fine. He was looked after by the local SPCA, who Lake said “treated him like royalty,” and even microchipped him for free so he can be found more easily if he takes any more impromptu vacations.

Anita Kapuscinska, communications director for the Montreal SPCA, said she was glad the story had a happy ending.

“You could imagine their surprise when they received the call confirming that their missing cat was alive and well in Montreal,” she said.

She said Baloo will be home for the holidays: Freedom Drivers, a group of volunteers that transport shelter animals, left Montreal Friday evening to take him home.

Kapuscinska recommends that anyone with a cat double-check any packages before sending them out to prevent any hairy situations in the future.

“We all know that cats love boxes, so hopefully we’ll all be a little more vigilant when packing up boxes in the future,” she said.

As for Lake, she said she’s happy that Baloo is coming back to his loving home.

“I’m so glad that he’s okay, and everybody worked so hard to get him back to me,” she said.

She added that her kids are especially excited to see their beloved pet.

“Although they’ll never let me live this down,” she added.