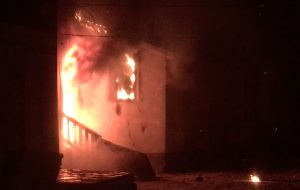 Flames shoot out from a home in the 500 block of William Avenue early Sunday, December 16, 2018. (KEEGAN DRIEDGER PHOTO)

Winnipeg firefighters doused a blaze at a home in the 500 block of William Avenue early Sunday.

The fire in the two and a half-storey residence broke out shortly after 1 a.m., forcing crews to fight an offensive attack upon arrival.

One person was treated on scene and transported to hospital for smoke inhalation.