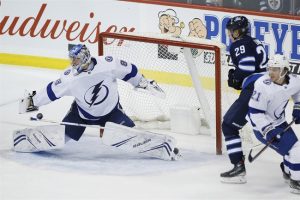 Winnipeg Jets’ Patrik Laine (29) looks on as a shot from teammate Mark Scheifele, not shown, gets past Tampa Bay Lightning goaltender Andrei Vasilevskiy (88) for the game-winning goal during overtime NHL action in Winnipeg on Sunday, Dec. 16, 2018. (THE CANADIAN PRESS/John Woods)

WINNIPEG – Mark Scheifele was in a joking mood after setting up the tying goal and scoring the winner 4:18 into overtime as the Winnipeg Jets defeated the league-leading Tampa Bay Lightning 5-4 on Sunday.

Scheifele was asked how he was feeling about his scoring touch of late, which includes a five-game point streak of five goals and nine assists. He also has three overtime goals this season, two in the past three games, and 21 goals and 46 points in 33 games.

“I think my fantasy football team is losing right now, so a little choked about that,” Scheifele told reporters with a grin amid laughter.

“On the hockey side of things, it’s obviously going well. But I play with some pretty special players and play on a pretty special team, so I’m just lucky to pop them in when I can.”

Winnipeg’s third straight overtime victory (22-9-2) extended its win streak to a season-high five games. It also put the team in a tie for second in the NHL with the Calgary Flames and tops in the Western Conference.

Scheifele finished with two assists, while Nikolaj Ehlers had a pair of goals and one assist and Mathieu Perreault and Brandon Tanev also scored.

Connor Hellebuyck made 43 saves for the Jets, who are 9-1 in their past 10 games.

Steven Stamkos had a goal and an assist for the Lightning. Nikita Kucherov, Alex Killorn and Tyler Johnson also scored. Brayden Point and Ondrej Palat each collected a pair of assists.

Andrei Vasilevskiy, in his second game back from a broken foot, stopped 37 shots and picked up an assist on Killorn’s goal.

The game-winner was changed to an unassisted goal for Scheifele. Patrik Laine skated in front of Vasilevskiy and lost the puck when the goalie poke-checked him. Scheifele swooped in and scored. The zone entry was also reviewed for offside but was upheld.

“It was a heck of a job by Patty, taking that puck hard to the net,” captain Blake Wheeler said. “And if you leave Scheif alone right there, he’s gonna bury it. He’s playing as well as anyone right now and coming up huge when we need him.

“I think it was an entertaining game for fans,” Killorn said. “I know a lot of people were probably watching just because of where we stand in the East and where they stand in the West.

“I thought it was an entertaining game. Obviously, a lot of goals being scored. We don’t want to allow that many but it was a good game.”

The quick-paced match was tied 1-1 after the first period and 3-3 after two.

The Lightning took a 4-3 lead at 6:55 of the third period with Kucherov’s power-play goal, but Ehlers tied it up with his second goal of the game at 14:23.

“We used our speed against them and they did it to us, too,” Lightning defenceman Ryan McDonagh said. “In the end, it’s a stinging feeling for sure when you have a lead like that late on the road and can’t find a way to close it out.”

Ehlers tied it up when a shot by Scheifele missed the net and went off the backboards, bouncing up to Ehlers who got his stick on it to beat Vasilevskiy. Byfuglien picked up an assist. His point streak is five games with one goal and seven assists.

“I didn’t think too much,” Ehlers said. “I just tried to dive and get the puck into the net.”