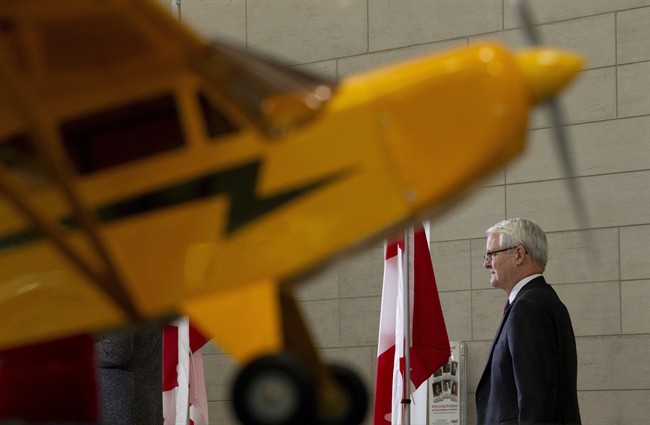 Transport Minister Marc Garneau waits to speak about passenger rights during a news conference at the airport in Ottawa, Monday December 17, 2018. (THE CANADIAN PRESS/Adrian Wyld)

OTTAWA – Air passengers who are bumped from overbooked flights or forced to sit through long delays could receive up to $2,400 in compensation — cash or something more than a pile of coffee coupons — under proposed regulations for the government’s long-promised passenger bill of rights.

The proposed compensation will use a sliding scale, with larger airlines and longer delays requiring bigger compensation payments. Payments to passengers whose flights are delayed will max out at $1,000 and cancellations at $2,400.

Aside from situations beyond their control, there are loopholes that could allow an airline to get off the hook for compensation — specifically mechanical issues that make it unsafe to fly.

Transport Minister Marc Garneau was adamant Monday that airlines won’t mess around with safety and dismissed the idea that airlines will look for ways to get out of compensating passengers.

The Canadian Transportation Agency is releasing the draft regulations for public comment this weekend and aims to have the rules take effect by next summer.

Once published on Saturday, Canadians will have 60 days to comment — meaning there may be one last battle between consumer advocates and airlines over the breadth of the proposed regulations.

Garneau said the extra time to consult is necessary to make sure the final rules are the best they can be.

The rules making up the air passenger bill of rights lay out the minimum standards airlines will have to follow for situations in their control — or face a $25,000 fine.

The regulations would also force airlines to automatically seat children under age 14 next to their parents rather than require them to pay an additional fee to select their own seats.

They would also set rules around how airlines treat passengers sitting through lengthy tarmac delays.

Scott Streiner, the chairman of the Canadian Transportation Agency, says a key aspect of the rules is an expectation that airlines clearly communicate with passengers about the status of their flight.