By Dan Greenspan, The Associated Press 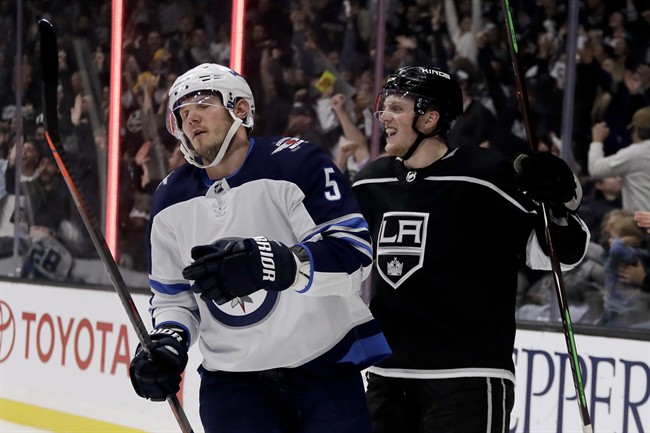 Against the surging Winnipeg Jets, however, the Kings got back to their defensive roots and delivered one of their best performances in a disappointing season.

Austin Wagner scored twice and Los Angeles snapped a four-game losing streak Tuesday night with a 4-1 victory over the Jets.

“I don’t think there was any doubt in anyone’s mind that we should have won that hockey game,” said Kings defenceman Drew Doughty, who had an assist. “We played a full 60 minutes and it’s really good Kings hockey right there. We need to do it again. And again.”

Alex Iafallo and Nate Thompson each had a goal and Jonathan Quick made 27 saves for the Kings, who ended Winnipeg’s five-game winning streak.

Mathieu Perreault scored for the fifth straight game and Connor Hellebuyck stopped 27 shots as the Jets lost for only the second time in 11 games. Winnipeg also had won five in a row on the road.

“But they earned it,” Jets coach Paul Maurice said of the Kings. “They competed on every puck and battled hard. The back check was outstanding. We weren’t crossing through the neutral zone at all. It was straight lines.”

Iafallo extended his point streak to five games by putting the Kings back in front 2-1 at 9:08 of the second period. Iafallo tipped in Doughty’s shot after the defenceman caught Hellebuyck out of position, giving him two goals and four assists during his streak.

Wagner scored on a breakaway at 18:08 of the second for the rookie’s first multigoal game, making it 3-1.

The Kings scored at least three goals in consecutive games for the second time this season, and Wagner said re-establishing the focus on defending is responsible for the increased production. That commitment was evident in Los Angeles’ 18 blocked shots.

“When we’re breaking out clean and not turning over pucks, we’re creating a lot of offence,” Wagner said. “We’re playing well right now and we’ve just got to keep it going.”

Thompson added an empty-netter at 19:55 of the third.

Wagner put the Kings ahead 1-0 with seven minutes left in the first period by deflecting Daniel Brickley’s long shot. Hellebuyck made the save, but the puck bounced into the air and trickled in. Jets defenceman Josh Morrissey had a chance to clear the puck, only for it to skip over his stick.

The Jets tied it 1-all just 1:52 into the second when Perreault redirected Bryan Little’s shot past Quick. The five-game scoring streak is the longest of Perreault’s career, and he has five goals and one assist in his past six games.

But quality scoring chances were hard to come by for the Jets. When they did generate them, the Jets failed to convert, such as when Nikolaj Ehlers put his shot toward an open net off the post in the sequence prior to Wagner’s second goal.

“Just one of those nights,” Perreault said. “Bounce didn’t go our way. We had our chances, just couldn’t put them in, and they scored on our chances. That’s kind of the story of this game really.”

NOTES: Kings forward Kyle Clifford said he cleared concussion protocol. Clifford, who did not play against the Jets, missed five games after being hit in the head by Vegas forward Pierre-Edouard Bellemare on Dec. 8. … Kings forward Nikita Scherbak played one shift in the final two periods, which coach Willie Desjardins said was because of performance.

Jets: Continue their road trip at San Jose on Thursday.

Kings: Visit the Sharks on Saturday.