Canada to Impose Stricter Rules for Drone Operation Next Year 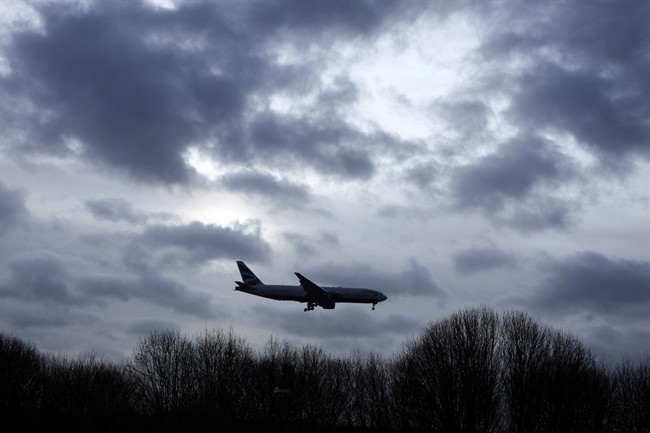 A plane comes in to land at Gatwick Airport in England, Friday, Dec. 21, 2018. ( THE CANADIAN PRESS/AP/Kirsty Wigglesworth)

Incoming new rules for drone operation in Canada are designed to help buck a growing global trend of incursions into space reserved for air travel, government officials said as tens of thousands of travellers in Britain grappled with the fallout of the largest such incident to date.

Canadians were among those stranded at London’s Gatwick Airport, which effectively shut down for 36 hours after drones were spotted buzzing the runway.

The prospect of a deadly collision between what police described as industrial-grade drones and an airliner led authorities to stop all flights in and out of Britain’s second-busiest airport on Thursday. While flights had resumed by Friday, officials said more delays and cancellations were expected.

Government agencies around the world, including Transport Canada, have documented a spike in the number of incidents posing a risk to aviation safety in recent years.

The federal agency said tighter regulations that would impose age limits, knowledge tests and registration requirements on all drone operators are set to come into effect in 2019 and will hopefully curb the trend.

“The number of reported incidents more than tripled from 38 when data collection began in 2014 to 135 last year,” Transport Canada said in a statement, adding the 2018 figure stood at 95 as of Nov. 30. “This brings with it increasing threats to the safety of Canadian airspace and to the safety of people on the ground.”

Canada and several other countries already have rules in place mandating minimum distances between drones and airspace, with guidelines changing based on the size and classification of the drone.

Existing rules impose few limits on those wanting to fly drones weighing less than 35 kilograms for recreational purposes and no special permissions are necessary, but Transport Canada offers some guidelines for safe operation. These include flying drones less than 90 metres above the ground, staying at least 5.6 kilometres away from airports and 1.9 kilometres away from heliports.

Violating those rules, the agency said, could result in fines of up to $3,000.

Larger drones weighing more than 35 kilograms, or those used for research or work, currently require permission to operate via a Special Flight Operations Certificate. Fines for violating those certificates range from up to $15,000 for individuals to $25,000 for corporations, Transport Canada said.

Much of this would change under the proposed new rules, which would impose stricter limits on anyone planning to operate a drone weighing between 250 grams and 25 kilograms.

Rules would be particularly stringent for those operating in urban areas, near controlled airspace or close to airports.

Transport Canada is advising a minimum age of operation of 16 in those zones, and would-be pilots would also have to pass a written test, register their devices and affix government-issued registration marks to the aircraft.

The agency said endangering aircraft is a particularly serious offence that even now can carry additional fines of up to $25,000 or possible prison time.

One such event took place in October 2017 when a drone struck a plane as it was flying into an airport in Quebec City, causing minor damage to the aircraft.

Canada is not alone in documenting an increase of encroachments into aviation space.

In the United States, there were nearly 2,300 drone sightings at airports in the year ending June 30, according to Federal Aviation Administration records. Runways have been temporarily closed, but an FAA spokesman said he could not recall drones ever leading to the shutdown of a U.S. airport.

“This has gone from being what a few years ago we would have called an emerging threat to a more active threat,” said Patrick Smith, who is an airline pilot. “The hardware is getting bigger and heavier and potentially more lethal, and so we need a way to control how these devices are used and under what rules.”

Drones that collide with planes could cause more damage than birds of the same size because of their solid motors, batteries and other parts, according to a study released by the FAA.

American authorities are in the midst of taking an additional step that a lawyer specializing in robotics and drone regulations suggests Canada would be wise to adopt.

Diana Cooper, senior vice-president of policy & strategy at PrecisionHawk, a commercial drone and data company, said the U.S. is currently moving forward with rules for remote identification of drones.

“(It) is similar to a license plate for cars, it allows law enforcement to remotely identify information about a drone such as the name and the location of the operator,” she said. “That’s an area that Canada is behind on and should take up in order to increase safety and facilitate compliance and enforcement of rules.”

Transport Canada said it will “continue to monitor trends in technology and policy development with respect to remote identification.”