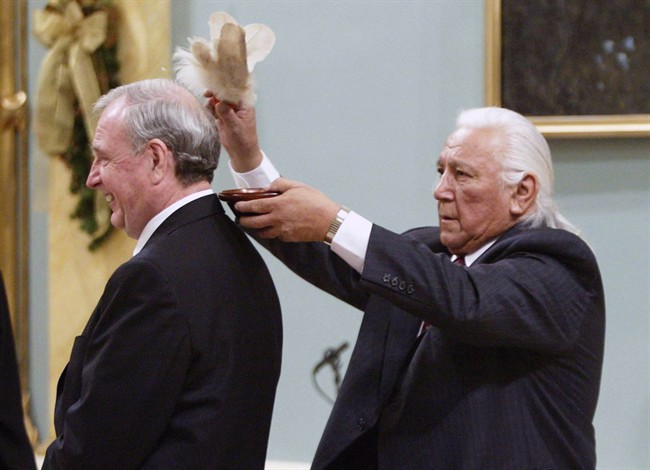 Elder Elmer Courchene performs a cleansing ceremony on Liberal Leader Paul Martin prior to being sworn in as Canada’s 21st Prime Minister during a ceremony Friday, Dec 12, 2003 in Ottawa. Courchene died from lung cancer on Dec. 5 at the age of 82. He was known as Standing Strong Man, had been with the Assembly of First Nations since 2005 and advised National Chief Perry Bellegarde and former national chiefs Phil Fontaine and Shawn Atleo. (THE CANADIAN PRESS/Tom Hanson)

WINNIPEG – Randal Courchene remembers his father exhausted from work on a snowy day in the middle of winter on their northern Ontario First Nation.

Courchene was just a child then and was working on an elaborate snow sculpture for a school assignment.

Despite a long day of work as a welder and a long walk home to Biigtigong Nishnaabeg, then known as the Pic River First Nation, Elmer Courchene spent the night in the cold helping his son to mould the fluffy snow into a masterpiece.

He woke up early the next day to help his son drag the sculpture to the winter carnival on a small red sleigh.

“I remember running home and showing my mom and dad that I won first place,” Courchene said in a recent interview from Biigtigong Nishnaabeg on the northern shore of Lake Superior.

“That’s something my dad did after work when he was dead tired, to help his young son who didn’t appreciate it. That’s the love I remember.”

Elmer Courchene died from lung cancer on Dec. 5 at the age of 82.

He was known as Standing Strong Man, had been with the Assembly of First Nations since 2005 and advised National Chief Perry Bellegarde and former national chiefs Phil Fontaine and Shawn Atleo.

He also worked with the Assembly of Manitoba Chiefs as well as with leaders in his home community of Sagkeeng First Nation in Manitoba.

“He was such a humble man. He never said, ‘Do it this way’ or ‘Do it that way.’ You would just listen to him and you knew what he was saying indirectly,” said Sagkeeng Chief Derrick Henderson. “He was very, very humble and very, very passionate about kids and community.”

“Things weren’t always perfect for us growing up because my dad was a residential school survivor but, even through that, he always managed to express his love, for me, for my mom, and even for his friends,” his son said.

“One of the hardest things I’ve ever done with my dad was the residential school hearings,” Courchene said. “He shared everything. He shared the abuse he had to suffer. That was very hard to have to listen to that, watch my dad cry. I know he was hurt. He was angry.”

Elmer Courchene asked his son to never share what happened with anyone. The experience would push him to become an advocate for self-determination and youth empowerment, but he didn’t want it to define him.

When he finished school, he played hockey for the Pine Falls Paper Kings before he moved to Winnipeg to become a welder. There, he met his future wife Delores, who was in the city learning to be a hairdresser.

Not long after their wedding in 1962, the young couple moved to her home community of Biigtigong Nishnaabeg to start a family.

Randal Courchene said his father struggled to recover from his childhood trauma. The son remembers as a child going with his father to Thunder Bay, Ont., so he could check himself in for alcoholism treatment.

Courchene said he thinks his father wanted him to see that it was OK to ask for help.

“He led by example.”

Decades later, Randal Courchene would walk through those same doors to get treatment so he could also be a loving father.

Elmer and Delores Courchene worked in substance abuse programs in their community before he returned to his spiritual teachings.

He introduced a sacred sweat lodge and eventually moved back to Sagkeeng, where he cemented his role as a spiritual adviser for Indigenous leaders. He worked behind the scenes on the Indian Residential Schools Settlement Agreement and as a supporter of Indigenous youth.

Courchene said it’s an honour knowing the effect his father had. Leaders from across the country have taken part in pipe ceremonies and memorial services for his father before he was buried on Biigtigong Nishnaabeg next to his other son, Ryley.

The only thing Courchene wanted from his father’s estate was a special pickup truck. He laughs when he remembers showing up unannounced at his dad’s place a few years ago and inviting him out for a ride.

← Previous: Canada Post Declares Its Operations Back to Normal Just Days Before Christmas Next: Friday is the Busiest Shopping Day of the Year →
Tags: Manitoba | Winnipeg