By Jim Morris, The Canadian Press 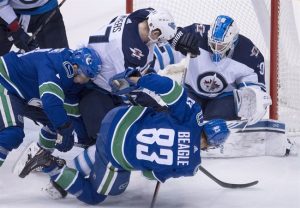 Brossoit stopped 40 shots at Rogers Arena and Mark Scheifele scored the only goal as the Jets defeated the Vancouver Canucks 1-0.

“This is one of those games I don’t think I will forget,” said Brossoit, who was born in Port Alberni, B.C., and grew up in Surrey, on the boarder of Vancouver. “To have that many shots and have the game go the way it did, and have my first shutout here in the building I grew up in, it was definitely a special moment.”

The Canucks pulled their goalie in the final minute and mounted a frantic attack. Brossoit faced a barrage of shots.

“You never want that kind of chaos but, at the end of the game, for it to go our way, the chaos is fine,” he said.

Brossoit showed his quickness in the first period, sticking out a pad to stop a Josh Leivo wrist shot, then blocked Elias Pettersson’s attempt on the rebound.

Midway through the second period, with Vancouver pressing on a power play, Brossoit dragged his leg in front of Alexander Edler’s shot from the point through traffic.

Brossoit improved his record this year to 8-1-1. He has 38 NHL games split between Winnipeg and Edmonton. The game against Vancouver — his first start against the Canucks — was his fourth start this month.

“It’s the most consistent amount of starts I’ve gotten in my NHL career,” said the 25-year-old, who had 25 family and friends at the game. “I appreciate the vote of confidence to have me in consistently. It’s easier to prepare.”

Head coach Paul Maurice offered some humour while praising Brossoit, who joined Winnipeg this year as a free agent.

“Our goalie was our best player,” said Maurice. “He’s earned every start that he’s got.

“He just hasn’t given us a reason ever not to start him. As good as he is in the games, he’s equally good in practice, pushing to get better all the time. If he was on a longer term deal I’d talk more nice things about him, but we’ve got to sign him again this year so he’s just all right.”

Scheifele’s goal came with 92 seconds left in the third period to give the Jets (24-10-2) their 11th win in 13 games. It also was Winnipeg’s eighth straight victory over Vancouver.

Scheifele’s shot came from the left face-off dot on a give-and-go play with defenceman Dustin Byfuglien. It was his 22nd goal of the season.

The 25-year-old former first-round draft pick has been on a torrid pace, collecting 17 points (six goals, 11 assists) in the last seven games.

Losing on a late goal was a bitter pill for the Canucks (17-18-4), who suffered just their second regulation loss in their last nine games (6-2-1).

“It’s been a couple of games we’ve lost like that,” said forward Antoine Roussel. “It’s frustrating.

“You have to come up on top and learn from those games sometimes. You can’t be losing in the last two minutes of a game. We battle all the way and crack at the end. It hurts.”

Vancouver coach Travis Green said the game was “something to hang your hat on” as the Canucks held their ground against the Western Conference leading Jets.

“Our team played great tonight,” said Green. “One of our better games of the year.

“The guys wanted to win bad tonight and they played like it. We’ll be fine if we keep playing like that.”

While Green is pleased with the Canucks’ progression, goaltender Jacob Markstrom was frustrated the team remains 10th in the Western Conference, one point out of a playoff spot.

“We haven’t accomplished anything,” said Markstrom, who stopped 22 shots. “We are under .500 at Christmas time. You can’t say this is an accomplishment.”

NOTES: Edler played his 782nd game to surpass Harold Snepts for the most by a Canucks defenceman. …. Second-period shots were 17-7 in favour of Vancouver. … Early in the first period Byfuglien blasted a slapshot that hit forward Blake Wheeler in the midsection. Wheeler needed help getting to the bench and headed to the dressing room but returned later in the period. …. Winnipeg centre Andrew Copp missed his 10th straight game with an upper-body injury but is expected to return after the Christmas break.