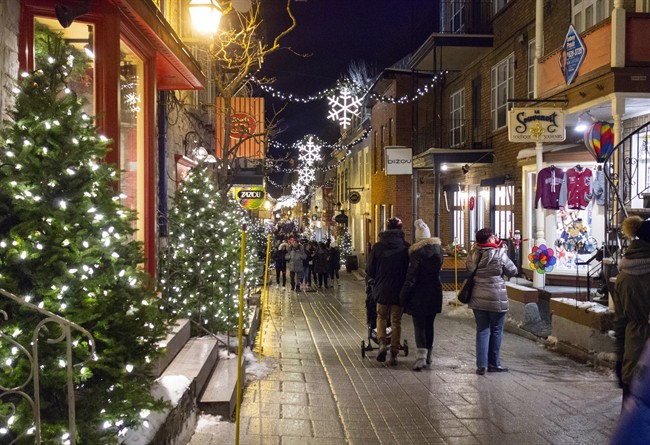 People walk under the Christmas lights on Petit-Champlain street in the old historic area of Quebec City, Sunday, Dec. 16, 2018. (THE CANADIAN PRESS/Jacques Boissinot)

Most Canadians won’t be getting a white Christmas this year, The Weather Network forecasts.

“For Christmas Eve specifically, the weather is really quiet across the country — unusually quiet. Typically this time of year we’re talking about somebody getting clobbered with a storm,” said the network’s chief meteorologist, Chris Scott.

While most metropolitan areas such as Toronto, Montreal and Vancouver will get zero to very little snow, Edmonton, Winnipeg and Regina are “guaranteed” to get a white Christmas, Scott said.

He said travellers should always be cautious around this time of year, but added that the relatively calm weather means good road conditions for most of Canada on Christmas Eve going into Christmas Day.

It won’t be a cold Christmas in British Columbia as temperatures are expected to be around 5 C and 7 C, which Scott said could be a sliver of good news for thousands of residents on the coast who are still without power after Thursday’s powerful windstorm.

The network is predicting about 10 millimetres of rain on Boxing Day, but Scott said Christmas Day will be pretty dry for the province.

“There’s no snow whatsoever in the lower mainland or the south coast, but there’s a lot of snow in the mountains. So once you go up in elevation, there’s some really great skiing to be had,” he said. “There’s great skiing conditions and no significant travel troubles.”

“It will certainly be a white Christmas in every aspect for all of Manitoba,” said Scott. He said the province already has snow on the ground and it be -12 C on Monday and -16 C on Tuesday.

In Saskatchewan, Scott said there isn’t a lot of snow on the ground, but there’s enough to make it a white Christmas as about one centimetre of snow is expected to top it off for Christmas Days in most parts of the province. Scott added that travel conditions should be fine as winds are low and temperatures will be around -11 C.

Scott said southern Alberta isn’t getting any snow this Christmas, but the northern part of the province could get one to three centimetres on Christmas Day and it will be -8 C.

Southern Ontario can expect a light snowfall on Christmas Eve of about a centimetre, Scott said, adding that it won’t stick as mild temperatures are expected at around zero. Scott said northern Ontario will be colder at about -6 C on Monday and -7 C on Tuesday.

But while this part of Canada won’t see a white Christmas, Scott said the network is tracking a storm that could bring 15 to 20 centimetres of snow over the weekend.

“There’s going to be snow, there could be some ice in some places. The bottom line is, if you’ve got travel plans later this week, please keep an eye on this storm,” said Scott. “This storm at the end of this week is something that you might be altering plans for, and that might be a real mess.”

On Christmas Eve and Christmas Day, the network predicts it’s going to be chilly with around average temperatures for this part of Canada, but Scott said no major snow systems are expected.

The network is forecasting temperatures for Christmas Day and Christmas Eve to be around -2 C in Newfoundland and Labrador, -4 C in Nova Scotia and – 8 C in Prince Edward Island and New Brunswick.

Those in Northern Canada can expect typical weather conditions for this time of year.

“There’s snow on the ground with cold conditions,” Scott said, adding that there will generally be light snow across the territories.

The weather network predicts for the Northwest Territories it will be about -22 C on Christmas Eve and -24 C on Christmas Day, but feeling like -32 C and similar temperatures for Nunavut.

Across Yukon, it will be about -14 C on Monday and Tuesday but feeling closer to -20 C.

← Previous: Plenty to Do Outdoors in Manitoba Over the Holidays Next: Woman Carjacked Sitting in Vehicle on Bannatyne Avenue →
Tags: Canada | Christmas | Manitoba | Snow | The Weather Network | Weather | Winnipeg