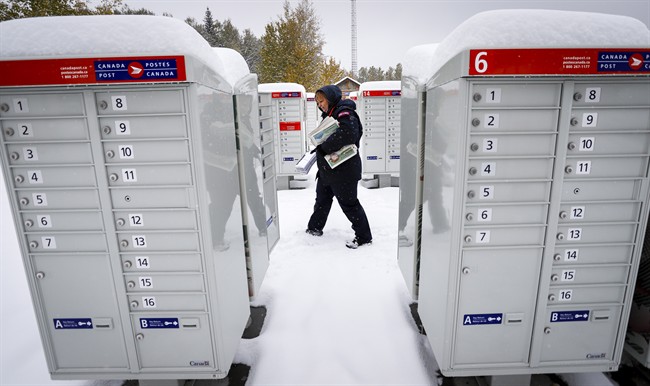 OTTAWA – Unless you really hurry, sending a letter to Santa for next Christmas will cost you a nickel more.

Starting Jan. 14, Canada Post says the cost for an individual stamp on a letter sent within Canada will be $1.05, instead of a loonie. Other increases for mail within the country range between a dime and 35 cents depending on the size of the letter.

The cost of sending letters to the United States will go up between seven and 20 cents, while overseas mail will need an extra 15 to 20 cents to get there.

The new rates are the first increase since March 2014.

Canada Post says the increases should generate $26 million in revenues for the postal service, of which $11 million will come from consumers and the remaining $15 million from small and medium-sized businesses.

Regulatory text posted online Monday estimates that the new rates will cost the average Canadian household about 65 cents next year.

The average cost for small businesses that use stamps to pay postage will be about $14.21.

Canada Post has long pointed to declines in letter mail as more Canadians opt to send emails instead of a written note. The regulatory text says that letter mail volume has almost been cut in half since 2006 — about two billion letters — and along with it revenue for the Crown corporation.

Federal rules require Canada Post to set postage rates that are fair, reasonable and enough to help defray the costs of operation.

“Given the current rate at which letter mail volumes are declining and the other financial pressures faced by Canada Post, it may no longer generate sufficient revenue to meet its service obligations in the future without regular changes in its rate structure,” says a posting in the Canada Gazette, a government publication detailing new federal rules and regulations.

In late November, Canada Post said it expects to finish its fiscal year with a loss.

The postal service was ordered in September to increase pay for suburban and rural postal employees by 25 per cent, which the agency said would cost $550 million by the end of the year, including a charge of $130 million that was put on its books in the final quarter of 2017.

Postal workers went on rotating strikes in late October, but about a month later the Liberals legislated an end to job action after Canada Post complained that a backlog of parcels had reached historic levels ahead of the crucial holiday shopping period.