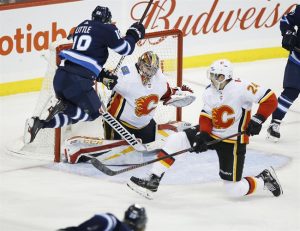 WINNIPEG – Johnny Gaudreau got the hat trick, but he heaped praise on netminder David Rittich.

Rittich made 35 saves as the Calgary Flames ended a three-game losing skid with a 4-1 victory over the Winnipeg Jets on Thursday.

“I think Ritter, Dave Rittich, played out of his mind tonight,” Gaudreau said.

“He made some big saves and kept us in that game. It could have easily been 2-2, 3-3 there, going late into the third. He played unbelievable tonight and got us that win.”

Mark Jankowski had a shorthanded, third-period goal for Calgary (23-12-3), which was 0-2-1 heading into the game. Sean Monahan contributed three assists and Elias Lindholm added a pair.

Adam Lowry scored for the Jets, who had won their previous two games and had a four-game win streak at home halted.

His first goal was actually a redirection by Jets forward Patrik Laine, who stuck out his stick to block a Gaudreau pass attempt to Lindholm, but the puck went by Hellebuyck. His third goal was into an empty net.

Just before the empty-netter with 2:06 left in the game, Gaudreau was slashed on the arm by Jets defenceman Dustin Byfuglien, who got a penalty.

Gaudreau left the ice in discomfort, but told reporters he was “fine.” However, he was surprised at the timing of Byfuglien’s stick work.

“You know, it’s part of hockey. I mean, it won’t be the last time I’m slashed,” Gaudreau said. “Just kind of surprised. I had a foot or two on him, so I didn’t think I was going to get a stick to the arm, but I found the empty net and that’s the way it goes.”

The Jets are still first in the NHL Western Conference, one point ahead of Calgary.

“You know after four days off it’s kind of a weird feeling, but I think everyone did a great job,” Rittich said.

Jets forward Bryan Little was the victim of a couple of Rittich’s solid saves.

“We had some really good chances and (Rittich) was standing on his head in there,” Little said. “He was making some big saves at important times of the game, too. You’re going to have those nights.”

“We’re not going to fool ourselves and pretend we played a great game and their goalie stole it,” Wheeler said. “But he played well. They capitalized on their looks and we didn’t. But we’ve got another level.”

Winnipeg outshot Calgary 14-7 in the scoreless opening period, with both teams a bit sloppy after their Christmas breaks.

Gaudreau scored his 17th goal of the season at 1:04 of the second with Laine’s accidental redirection.

A few minutes later, Jets fans had a bit of a scare when Hellebuyck bent over to smother a puck with his glove at the side of the crease. The knee of Flames defenceman Noah Hanifin caught the goalie in the head, knocking off his mask. Hellebuyck appeared shaken, but after a trainer came out to look at him, he remained in the game.

Lowry tied it 1-1 with 2:07 left in the period after he intercepted a pass by Flames forward Alan Quine, but 54 seconds later Gaudreau took a pass from Lindholm and put a backhand shot past a sprawled Hellebuyck to regain the lead.

Calgary captain Mark Giordano, who had assist on Gaudreau’s third goal, was playing in his 791st NHL game, tying him with Theo Fleury for fourth most games with the Flames in franchise history.