By David Reevely, The Canadian Press 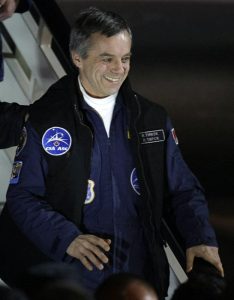 Canadian astronaut Robert Thirsk smiles as he arrives at the Star City, outside Moscow, Russia, Wednesday, Dec. 2, 2009. The Canadian Space Agency wants to hire former astronaut Thirsk to help it figure out how to contribute medical expertise to a human mission to Mars. (THE CANADIAN PRESS/AP/Misha Japaridze)

OTTAWA – The Canadian Space Agency says it wants to hire former astronaut Robert Thirsk to help it figure out how to contribute medical expertise to a human mission to Mars.

Thirsk is a medical doctor who holds the Canadian record for time spent in space, thanks to an extended mission on the International Space Station in 2009. Those are two of the qualifications the space agency considers essential for the $94,500 contract it made public Friday, saying Thirsk is the only person on Earth who fits the bill.

“As such, Dr. Thirsk is uniquely positioned to provide the CSA with the perspective of a crewmember and medical officer with regards to health and performance requirements during long-duration flights, as well as the associated capabilities to meet these requirements,” the space agency said in a public posting Friday.

It issued an “advance contract award notice,” essentially an open call for anyone who thinks they can meet the agency’s needs better than Thirsk to speak up.

As those needs are defined in the posting, nobody could.

Former astronaut Roberta Bondar is a physician, but she spent eight days in space to Thirsk’s almost 205. Dave Williams is a doctor who led NASA’s space and life-sciences directorate and did a stint in charge of space crews’ health and safety, but his two missions added up to 28 days in space.

Chris Hadfield, probably Canada’s most famous astronaut, spent 166 days in space on two shuttle missions and a long stay on the International Space Station — but he’s a pilot, not a doctor.

Another noteworthy Canadian astronaut, Julie Payette, is otherwise engaged for the next two years as Governor General, while Marc Garneau, currently federal transport minister, is looking to get re-elected to the House of Commons next fall.

Even if either wanted the job, neither has the precise qualifications the agency is after.

The job involves spending the next two years determining what Canadian scientists and health experts can do to help astronauts beyond low Earth orbit, and sell the public on the benefits of investing in space-health science.

Thirsk would work with “the Canadian biomedical, health and performance communities so that space health care solutions contribute to the improvement of remote health care delivery on Earth, in addition to other terrestrial health care benefits,” the posting says.

Thirsk is also to work with NASA “to secure a critical and visible role in the area of astronaut health and performance.”

Thirsk did not respond to a request to talk about the work Friday.

The United States is contemplating a mission to Mars, likely in the early 2030s when the two planets will be closest. NASA’s administrator recently visited Ottawa to solicit Canadian help for preliminary steps, including a platform to orbit the moon for a human mission there.

Long space missions degrade astronauts’ muscles and bones, expose them to hard radiation and can even damage their senses. An astronaut who gets acutely ill or hurt in Earth orbit can be sent home fairly quickly; one who’s halfway to Mars can’t.

A voyage to Mars would take at least six months each way, long enough for serious problems to set in — especially if the astronauts making the trip want to arrive ready for physical work on the surface.

Thirsk led the agency’s expert panel that recommended work on minimizing these dangers should be how Canada helps the human race explore space, in a report that hasn’t been released yet.

Why are the qualifications for the contract so narrowly drawn?

“The contract in question is being put in place to further develop elements of the health-care vision outlined in the Expert Group Report (forthcoming) which incorporates the results of consultations with national and international experts,” Canadian Space Agency spokeswoman Arielle Mathieu said by email. “Dr. Robert Thirsk, former CSA astronaut, has been identified as having the unique qualifications, experience and availability to complete the work.

“Suppliers who consider themselves qualified may still submit a statement of capabilities for consideration, before Jan. 31, 2019.”

Thirsk called on the federal government to “restore adequate funding” to Canada’s space program “as a means to stretch our national capabilities and rally our citizens,” in a submission this fall to the House of Common’s finance committee.

The committee’s final report included a recommendation that the federal government commit in the 2019 budget to “significant, ongoing investments” in the space agency and to “contribute to space exploration and science.”