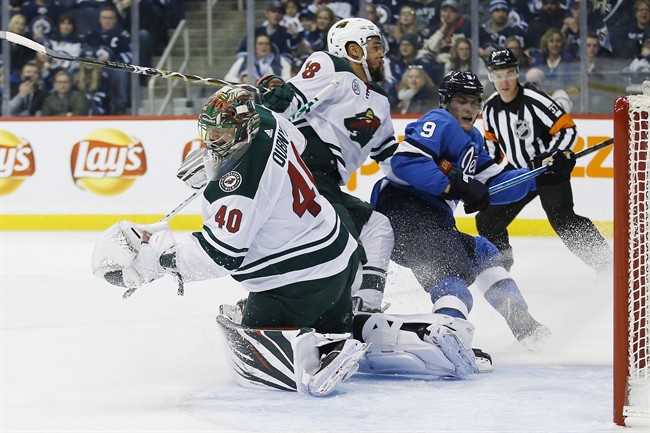 WINNIPEG – It was a bounce-back game for Devan Dubnyk, but the Minnesota Wild goalie didn’t want to look in the rear-view mirror.

Dubnyk made 26 saves as the Wild ended a season-high five-game losing streak with a 3-1 victory over the Winnipeg Jets on Saturday.

It wasn’t a good day for the Jets, who lost big defenceman Dustin Byfuglien to injury in the third period.

Minnesota was 0-4-1 in its past five games, with only five goals during that span. Dubnyk had been pulled in a 5-2 loss to Chicago on Thursday after letting in three goals on 10 shots.

“I don’t really want to talk about last game,” Dubnyk said. “I felt fine in there. We won’t get into that.”

Beating the Central Division-leading Jets (24-12-2) was an opportunity to “right the ship,” he said.

“You come into this building where they’re so good … and you know it’s going to be a huge task,” Dubnyk said. “Sometimes that opportunity and responsibility is kind of what you need to lift you out of it. That’s why it was such a big game for us.”

Defenceman Matt Bartkowski scored in his debut with the Wild (18-16-3). Charlie Coyle netted his sixth goal of the season and Eric Fehr sent the puck into an empty net. Zach Parise added a pair of assists.

Patrik Laine scored on the power play for his 24th goal of the season for Winnipeg, and his first point in five games. Connor Hellebuyck stopped 22 shots.

It marks only the second time Winnipeg has lost two straight games this season. Calgary defeated the Jets 4-1 on Thursday. Coincidentally, the earlier pair of losses also were against Calgary and then Minnesota in late November.

“(The Wild) play a strong defensive game, so maybe we were trying to make cute plays through them and it wasn’t working,” Winnipeg forward Mathieu Perreault said. “But we had some chances there later in the third … just couldn’t put them in.”

Byfuglien went to the dressing room midway through the third period after appearing to hurt his leg when he and Wild forward Luke Kunin collided along the boards.

Head coach Paul Maurice had no update, but said he didn’t see an “emotional sag” after the big blue-liner left the game.

Minnesota led 1-0 after the first period and 2-0 after two.

Called up earlier in the day, Bartkowski benefited when the Jets couldn’t clear the puck out of their own end. He took a pass from Marcus Foligno at the point and sent a shot past a screened Hellebuyck at 9:28.

“Pretty awesome,” Bartkowski said of scoring after getting brought up from Iowa of the American Hockey League. “You get the win, too, so you can’t really draw it up any better than that.”

Minnesota outshot the Jets 11-6 in the opening period, which featured six Winnipeg giveaways and line shuffles by Maurice. Coyle made it 2-0 for the visitors at 2:17 of the second.

Winnipeg’s second power play of the game paid off. After whiffing on a one-timer, Laine’s second opportunity was a rocket over Dubnyk’s blocker at 7:21. It was his 11th power-play marker of the season, tops in the league.

Fehr scored his fifth of the season into the empty net with 47 seconds remaining in the third.

Winnipeg plays in Edmonton on Monday. The Wild host Pittsburgh the same day.