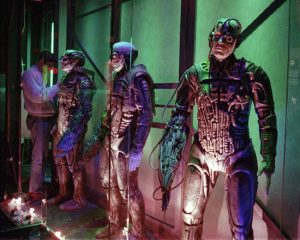 A worker puts the finishing touches on a display of Borgs, which lines the walls at Star Trek: The Experience, at the Las Vegas Hilton, Friday, Jan. 2, 1998, in Las Vegas. (THE CANADIAN PRESS/AP/Lennox McLendon)

WINNIPEG – Documents from a legal challenge by a “Star Trek” fan who had his personalized ASIMIL8 licence plate revoked show a Manitoba Public Insurance senior executive was shocked the plate was ever issued at a time when reconciliation with Indigenous people was coming to the forefront.

The email from vice-president Keith Ward to registrar of motor vehicles Carla Hocken on April 24, 2017, said approving the licence plate did not follow MPI procedures and required immediate action.

“We are considering serious disciplinary action for those who were involved and contributed to approving a plate that is so obviously inappropriate at a time when there was significant media coverage about the work of the Truth and Reconciliation Commission, etc,” Ward wrote.

“This is a very serious lack of judgment for those who were involved in doing the research and/or approving the plate for issue.”

Nick Troller filed a legal challenge against MPI over its decision to revoke the personalized plate.

Troller is an avid fan of the “Star Trek” TV franchise and in 2015 got the plate which features a well-known saying by the alien race the Borg. He put the ASIMIL8 plate in a border that stated:, “We are the Borg” and “Resistance is futile.”

In a recently filed legal brief, Troller explained that he drove around with the plate for nearly two years and no one complained. He renewed it with MPI in 2016 without issue.

An Ontario woman posted a photo of the licence plate on Facebook on April 22, 2017. Court filings show a transcript of a call she made to MPI in which she said the plate was offensive because of the history of government assimilation policies.

Court documents show that after the complaint was made, there was a flurry of emails between MPI officials trying to understand how the licence plate was approved in the first place.

Plates are denied for a variety of reasons, including if they are offensive, suggestive, discriminatory or include racial or ethnic slang. Since they are the property of the Crown, they can be recalled at any time.

The ASIMIL8 plate was considered by a five-person committee, internet searches were done on its meaning and it was issued without any concerns.

In another email, Ward said, “the process here did not work.”

Troller was contacted and told his plate was deemed inappropriate and was being recalled. Troller is arguing MPI’s decision to revoke the plate is a violation of his charter-protected right to free expression.

MPI did not comment on the filings because the case is before the courts.

The documents include a 47-page list of licence plates that were denied by MPI. They include BITE ME, VINO, MMMBEER, SKODEN, HYZNBRG, HOLYCOW, PWALKER and 50 GREY.

A man in Nova Scotia has also gone to court over a personalized licence plate. Lorne Grabher has been trying to reinstate his “GRABHER” plate since it was revoked in 2016 by the Registrar of Motor Vehicles following an anonymous complaint.

Court documents show MPI has vetoed hundreds of other personalized plates. Here are a few examples:

HYZNBRG — Deemed drug-related because of the television show “Breaking Bad”

HOLYCOW — Vetoed because MPI does not allow religious slogans

50SHADZ — Rejected because the book “50 Shades of Grey” is sexual

FISHFRY — Considered offensive and has a sexual connotation

DR POOP — Rejected because of the word poop

IBEEBAC — Deemed to have a criminal connotation

EMKNAPS — Rejected because it is “spank me” backwards

MMMBEER — Vetoed because it is alcohol-related

SOBR1 — Also rejected because it is alcohol-related

SKODEN — Rejected because it promotes violence

OVRTAXD — Refused because it is considered a political message