One Home Collapses, Two Others Heavily Damaged in Winnipeg Fire 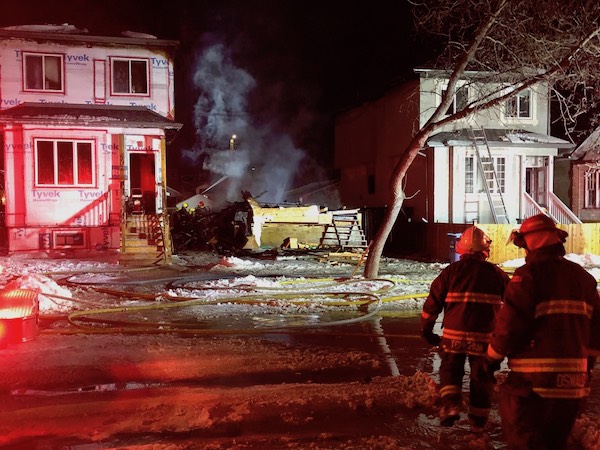 Firefighters fought a blaze in the 900 block of Manitoba Avenue early Friday that levelled one home and left two others heavily damaged. (@CITYOFWINNIPEG / TWITTER)

Winnipeg firefighters worked to control an overnight blaze that began in one North End home and quickly spread to two other residences.

Crews arrived in the 900 block of Manitoba Avenue shortly after 2 a.m. Friday and began interior offensive attacks in two of the three homes. The third home, which was under construction, completely collapsed during the blaze. The two others suffered significant damage and both roofs collapsed due to fire in the attics.

The Winnipeg Fire Paramedic Service says the fires were contained just after 3:30 a.m.

Two of the three homes were occupied at the time and all residents were able to safely self-evacuated.

People living in two nearby homes were also evacuated as a precaution. A Winnipeg Transit bus was used to temporarily shelter 14 evacuees. No injuries were reported.