Red River Mutual Trail Opens for Skating at The Forks 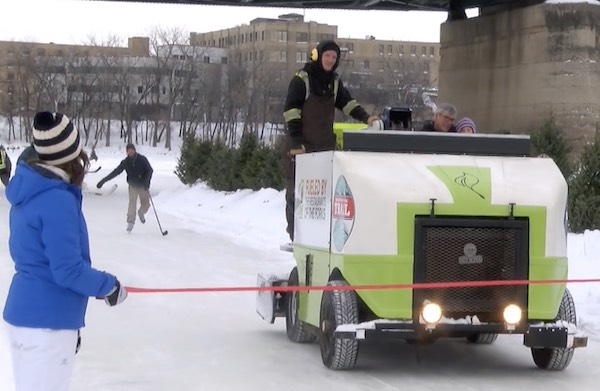 WINNIPEG — Some would say gliding down the Red River Mutual Trail is a rite of winter passage in Winnipeg.

The trail officially opened Friday at The Forks, but parts of it have already been in action since December 28 when the port rink first saw skaters.

“The Red River Mutual Trail connects neighbourhoods and allows people to explore our city from a totally different perspective,” said Paul Jordan, CEO of The Forks.

“Our calendar is packed with outdoor events at The Forks, and the cold of winter doesn’t seem to be slowing us down — in fact it’s just the opposite.”

Two kilometres of the freshly-groomed trail is open on the Assiniboine River to the Osborne Street Bridge, and to Queen Elizabeth Way on the Red River. Additional openings will be communicated on social media and The Forks’ website.

Mother Nature will dictate how far crews can safely extend the Guinness World Record-holding skating trail, which spans parts of the Red and Assiniboine Rivers. To compare conditions, 7.5 kilometres of the trail was ready to go on January 23, 2018.

For those who don’t skate, there’s an adjacent walking trail extending the same distance. The Forks also offers on-land skating trails as well as a toboggan run and hockey rink near Festival Park.

IT’S OFFICIALLY #RRMTrail SEASON! ?? The trail is open from Queen Elizabeth Way on the Red – Osborne Bridge on the Assiniboine! Thanks as always to our sponsor, @RedRiverMutual #MeetMeAtTheForks #Winter #Winnipeg pic.twitter.com/e7ipyEEftl