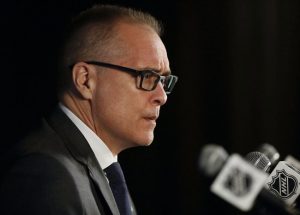 Winnipeg Jets head coach Paul Maurice talks to media after game one in the NHL Western Conference Final in Winnipeg on Saturday, May 12, 2018. (THE CANADIAN PRESS/John Woods)

Winnipeg Jets bench boss Paul Maurice has been named head coach of the Central Division at the 2019 NHL All-Star Game.

The NHL All-Star Weekend is being hosted by the San Jose Sharks at the SAP Center on January 25-26.

The 51-year-old Sault Ste. Marie native has guided the Jets to a 25-13-2 record through the first half of the season and a first-place standing in the Central Division. Last season under Maurice, the Jets won the first two playoff series in franchise history and reached the Western Conference Final.

Maurice is the third member of the Jets going to the all-star weekend, joining forwards Mark Scheifele and Blake Wheeler.

Head coaches for the All-Star Game are chosen based on the highest points percentage (points earned divided by total possible points) in each of the four divisions through games of Saturday, January 5.