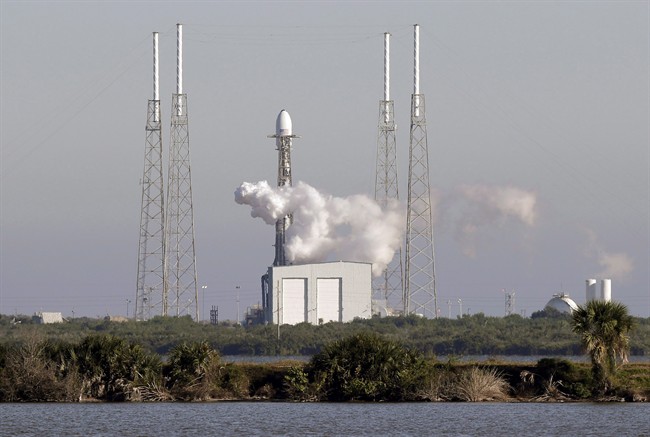 A Falcon 9 SpaceX rocket, stands ready at space launch complex 40, shortly before the launch was scrubbed because of a technical issue at the Cape Canaveral Air Force Station in Cape Canaveral, Fla., Tuesday, Dec. 18, 2018. (THE CANADIAN PRESS/AP-John Raoux)

MONTREAL – President Donald Trump’s push to create a U.S. space force is being welcomed by military experts in Canada, and the executive director of one defence think tank says Canada should consider following suit.

“At some point, we might like to think about a space force,” Matthew Overton, executive director of the Conference of Defence Associations Institute, said in an interview. “Thinking about space as a separate entity in itself that deserves attention and expertise, I think is a good idea.”

But it is not something that needs to be done immediately, he added, suggesting Canada should first develop a centre of excellence on space knowledge.

Last month, Trump took the first step toward a space force when he signed an order to create a U.S. Space Command, which pulls together space-related units from across military services into a co-ordinated, independent organization.

The move comes amid growing concerns that China and Russia are working on ways to disrupt, disable or even destroy U.S. satellites.

The U.S. air force has operated a space command since 1982, and its mission is “to provide resilient, defendable and affordable space capabilities for the air force.” It also operates the mysterious X-37B space plane, known simply as its orbital test vehicle. The unmanned plane has already completed four clandestine missions, carrying classified payloads on long-duration flights.

Overton, who served in the Canadian Forces for 39 years, noted that Canada’s Air Force already has a space component. It is led by Brigadier General Kevin Whale, Director General Space. Its mission, a spokesman said by email, is “to maintain space domain awareness, and to develop, deliver and assure space-based capabilities.”

Overton said Trump’s space force makes a lot of sense, but he expects there will be tension as the new entity gets down to work with other branches of the military. He gave the example of the GPS network, which is crucial for land, air and sea forces, but could become a space force responsibility.

“What is the relationship with other forces? How do you work out that dynamic?”

Wayne Ellis, who served in the Canadian military for 20 years, agrees that a U.S. space force is a good idea.

“I think there’s enough activity and potential activity to concentrate resources in that domain, which probably merits a separation from the air force,” Ellis, a past president of the Canadian Space Society, said in an interview.

“Perhaps now is a good opportunity to look at a totally separate branch — at least for the U.S.”

He noted that Canadian military personnel have worked side by side with the U.S. military for decades. “A lot of these positions are actually space positions at various bases so, at some point, our posted personnel are going to be interacting with the U.S. space force as it gets set up,” he added.

“For Canada, my sense is that we need to watch this and see how it evolves,” he said. Before Canada considers creating its own space force, Bezan added, it should focus on making Norad — the bilateral North American Aerospace Defence Command — more effective.

“New Democrats are fundamentally opposed to the militarization of space and believe that space should only be used by all of humanity for peaceful purposes,” he wrote in an email.

“New Democrats urge the government of Canada to uphold the principles of peaceful space exploration and to engage with our allies on a renewed call for the drafting of an international treaty aimed at the prevention of an arms race in space.”

Overton pointed out that space has long been exploited for military purposes, and there’s no way it can be avoided.

“Communications satellites, GPS and intelligence communications, you name it — all that is there,” he said.

The office of the Minister of National Defence noted in a statement that “space-based capabilities have become essential to Canada’s operations at home and abroad.

“That is why Canada’s defence policy … commits to investing in a range of space capabilities such as satellite communications, to help achieve global coverage, including the Arctic.”

The statement goes on to say that “Canada will continue to promote the peaceful use of space and provide leadership in shaping international norms for responsible behaviour in space.”