Southern Manitoba in Store for Up to 15 Centimetres of Snow 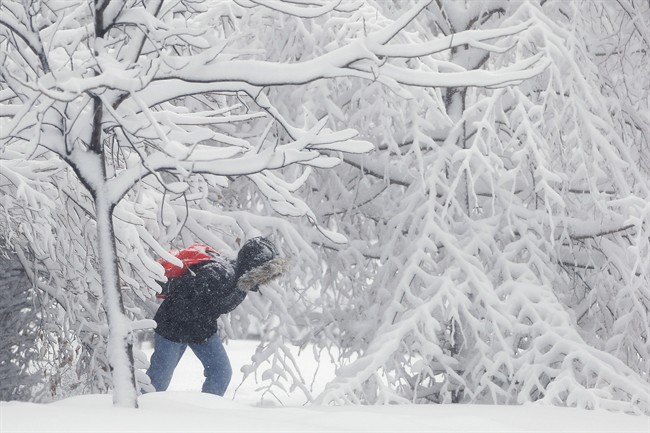 Nico Boyd ducks under some heavily snow-laden tress as she makes her way to school along Dromore Avenue sidewalk in Winnipeg on Monday, March 5, 2018. (THE CANADIAN PRESS/John Woods)

WINNIPEG — Southern Manitoba is on track for a good old fashioned winter wallop by Monday.

A snowfall warning has been issued for Winnipeg and parts of southern Manitoba as a low-pressure system developing over southern Alberta makes its way into the province.

Environment Canada says the weather system will spread eastward today into western Manitoba this afternoon and into eastern Manitoba by evening, bringing with it snowfall amounts of 5 to 10 cm. As the system tracks toward eastern regions of the province, higher amounts of 10 to 15 cm are possible.

Wind gusts are expected to kick up to 60 km/h to combine with the snow, making for poor visibility tonight.

As of Sunday morning, the snowfall warning was in effect for: