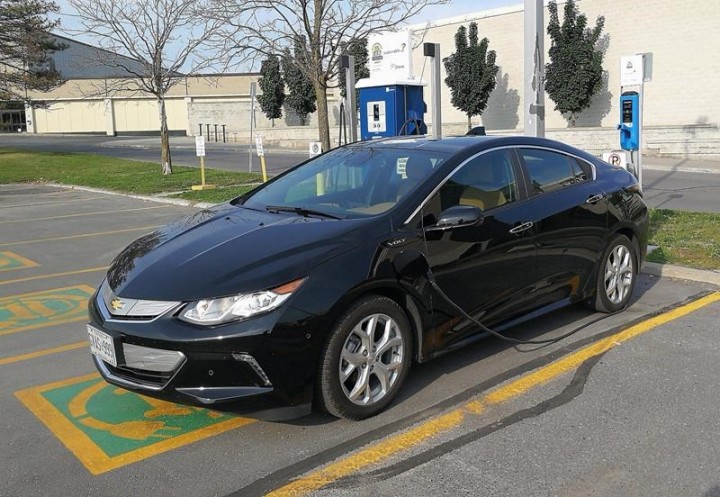 An electric car is plugged into a charging station at Lansdowne Mall in Peterborough, Ont., on June 17, 2018. (THE CANADIAN PRESS/Doug Ives)

OTTAWA — A decade-old goal to get at least half a million electric cars on Canada’s roads by the end of 2018 appears to have missed the mark by about 400,000.

The 2009 Electric Vehicle Technology Road Map for Canada, produced by a panel of experts in part for the Department of Natural Resources, aimed for 500,000 cars with the hope of galvanizing industry to make and sell them and government to encourage people to buy them.

Although more electric cars were sold in Canada in 2018 than in the previous three years combined, they still accounted for about two per cent of the vehicles sold overall and there are only about 100,000 of them on the road.

The plan warned in 2009 that Canada was in a race to get in on the front end of the electric-vehicle industry, a race it was already losing.

The Liberal government promised in 2016 to develop a new electric-vehicle strategy by the end of 2018 but that deadline came and went with no sign of it.

Sources say Ottawa is trying to get an agreement with the provinces to announce a co-operative strategy in time for the next federal-provincial meeting of transport ministers, scheduled for the end of this month.