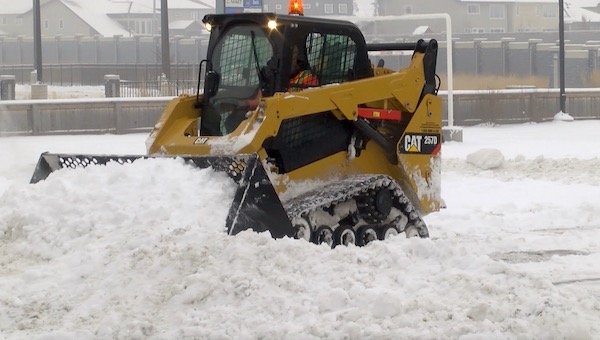 A Winnipeg parking lot is cleared after a snowfall on November 29, 2018. (CHRISD.CA FILE)

A residential parking ban is in effect as of 7 a.m. on Wednesday, January 9. Residents are urged to confirm their snow zone letter in order to determine when their residential street is scheduled for clearing.

Residents in snow zones A, G, J, L, P, and S will be the first to see plows, which will be operating until 7 p.m. on Wednesday.

The city says it has more than 200 spreaders and plows out to clear main routes, bus routes, collector streets, back lanes, sidewalks, and active transportation paths. Crews are also applying salt to roadways to improve traction.

Recycling and garbage collection may be slower than usual as a result of the snowfall. Residents who normally have collection on Monday are asked to leave their carts out until 10 p.m. If they haven’t been picked up, the city says to pull them up and place them out by 7 a.m. Tuesday.

Winnipeg Transit is currently experiencing delays. Residents are reminded to allow extra travel time and to check bus schedules before heading out.

The Winnipeg Regional Health Authority also says home care services are delayed today as a result of the snow.

Once plowing is completed, the annual snow route parking ban will continue to be in effect from 2 a.m. to 7 a.m. Check the city’s website to see if your home is on a snow route.