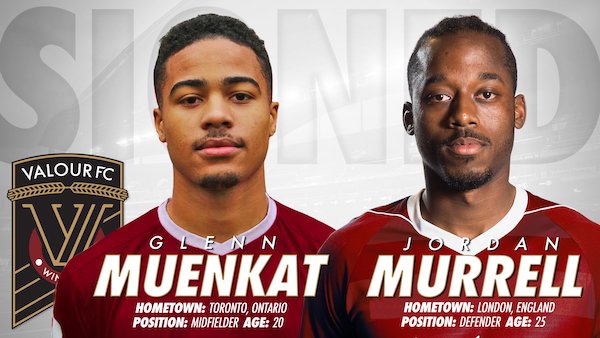 Valour FC coach and GM Rob Gale worked with both players during his time as a Canadian national youth coach.

Murrell, 25, was a third-round pick (57th overall) of Real Salt Lake in the 2015 MLS SuperDraft after a stellar career at Syracuse where he played 74 games.

He signed with RSL’s USL affiliate, Real Monarchs, before moving to the Pittsburgh Riverhounds and then Reno 1868 FC in 2016.

“Jordan is a player I had the pleasure to work with at the U-23 Olympic team level and skill-wise, resembles our first signing, Skylar (Thomas),” Gale said in a statement. “He is another exceptional character added to our organization, and we will be looking to his experiences and leadership to help build the right level of professionalism from day one.”

The 20-year-old Muenkat, a former member of the Toronto FC academy, had been playing in Germany for Kaiserslautern’s youth team

“Glenn is an exciting young talent and is a player I have known for quite a few years after working with him at the U-18 level,” said Gale. “The fact that an established European side took Glenn from Toronto FC shows the potential quality we are signing.”

Both players will join the team in Winnipeg for the start of pre-season in March. The CPL is scheduled to kick off its inaugural season in April.