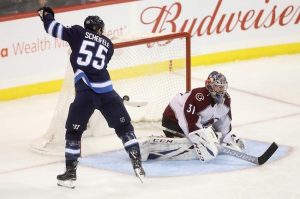 Winnipeg Jets’ Mark Scheifele (55) knocks his own rebound out of the air and into the back of the net behind Colorado Avalanche goaltender Philipp Grubauer (31) during third period NHL hockey action in Winnipeg, Tuesday, Jan. 8, 2019. (THE CANADIAN PRESS/Trevor Hagan)

WINNIPEG — Blake Wheeler knows the Winnipeg Jets have offence that can explode at any time. It did Tuesday night.

The captain was one of seven players who scored, and he added three assists, as the Jets defeated the Colorado Avalanche 7?4.

Gabriel Landeskog scored twice for Colorado to reach a career?high with 27 goals in a season. Carl Soderberg and Ryan Graves also scored. Nathan MacKinnon and Tyson Barrie each contributed a pair of assists.

Philipp Grubauer stopped 14 shots for Colorado (20?15?8), which had ended a six?game losing streak with a 6?1 win over the New York Rangers last Friday.

The Jets scored three times on the power play and once shorthanded to lead 2?1 after the first period. They mounted a 4?1 lead early in the second, but the Avalanche scored twice late in the period to squeeze the score 4?3 after two.

When asked what it meant that the team didn’t give up, Colorado forward Mikko Rantanen was blunt in deflecting any praise.

Winnipeg responded to Colorado’s surge with Copp and Scheifele’s third?period goals that made it 6?3 at 11:12.. Landeskog netted his second at 16:24, which was originally credited to MacKinnon, and then Trouba finished it with an empty?net goal on the power play with 1:06 remaining.

“That was pretty fun,” Scheifele said of the open game. “I’m sure the fans loved it. I’m good with it.”

MacKinnon extended his point streak to seven games with four goals and six assists. Barrie is on a five?game point streak with one goal and seven assists.

The game got off on an iffy note when Wheeler was called for tripping 13 seconds after the puck dropped. But the Jets killed off the penalty and Perreault scored his ninth of the season with a shot through Grubauer’s pads at 3:05.

Winnipeg’s first power play of the game led to Connor’s 15th goal of the season at 13:57.

Patrik Laine took a slashing penalty just over a minute later and Landeskog redirected in Barrie’s long shot at 16:04.

Laine was dinged for tripping early in the second, but Wheeler scored shorthanded with slick sequence with Scheifele. Wheeler dropped a pass to Scheifele, who quickly returned the puck to Wheeler in the slot for a one?timer that bumped up Winnipeg’s lead 3?1 at 3:22.

Little made it 4?1 at 6:32 with Soderberg in the penalty box for interference, but Soderberg made amends with his 12th of the season at 16:10. Graves followed up with a wraparound at 17:43.

“We have to stay positive, even if we’ve been losing a lot,” Soderberg said. “It’s still a new game tomorrow and I think we played pretty good. Take that with us and battle even harder tomorrow.”

Colorado continues its five?game road trip against Canadian teams Wednesday in Calgary. Winnipeg travels to Minnesota for a game on Thursday.