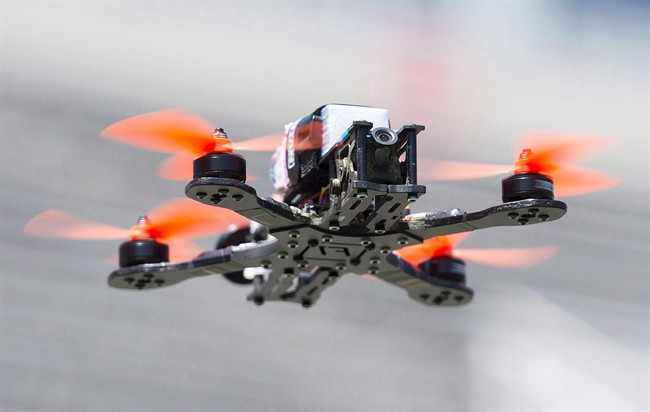 A drone hovers over the course during the Montreal drone expo, Saturday, June 25, 2016. (THE CANADIAN PRESS/Graham Hughes)

MONTREAL — The federal government is working with security agencies and airports to develop measures to prevent drones from flying into space reserved for aircraft, Transport Minister Marc Garneau said Wednesday as he announced new regulations for drone operators.

“We are working with different groups, including the airports but also security agencies, to examine what kinds of countermeasures would be applicable depending on the type of drone and circumstances,” Garneau said at a news conference in Montreal.

“Obviously, for security reasons, I can’t go into details on that, but this is something we are looking at extremely seriously because it represents potentially a dangerous situation.”

The first recorded collision between a drone and a passenger aircraft in Canada occurred in October 2017 as an inbound Skyjet flight was struck as it approached Quebec’s City’s airport. The pilot was able to land the plane safely.

Garneau announced strict new regulations that will require anyone flying a drone in Canada to pass an online exam and get a pilot’s certificate. The new rules, which come into effect June 1, apply to all drone operators, whether they fly for fun, work or research.

Operators will be required to register their drones and mark them with the registration number. A minimum age limit of 14 for basic operations and 16 for advanced will be introduced.

Pilots will have to keep their aircraft below 122 metres — 400 feet — above ground level and stay away from air traffic.

Unless they obtain a special flight certificate from Transport Canada, operators will have to keep their drones within their sightline and at least 30 metres from other people at all times and avoid public events and police security perimeters.

The new rules, which cover drones weighing between 250 grams and 25 kilograms, are aimed at countering a growing trend of drone incursions into space reserved for air travel.

Fines begin at between $1,000 and $3,000 for individuals but can rise much higher for corporations or anyone deliberately breaking the rules. Violators who deliberately fly near an aircraft’s flight path could be subject to fines of up to $25,000 and prison.

Garneau said that people who fly unmanned aircraft such as drones must accept the responsibilities that come with being a pilot.

“You are a pilot if you’re flying a drone, and because of the risks and responsibilities, it is imperative that you know the rules in effect in the sky,” he said.

Transport Canada has documented a spike in the number of incidents posing a risk to aviation safety in recent years. The number of reported incidents more than tripled to 135 in 2017 from 38 when data collection began in 2014.