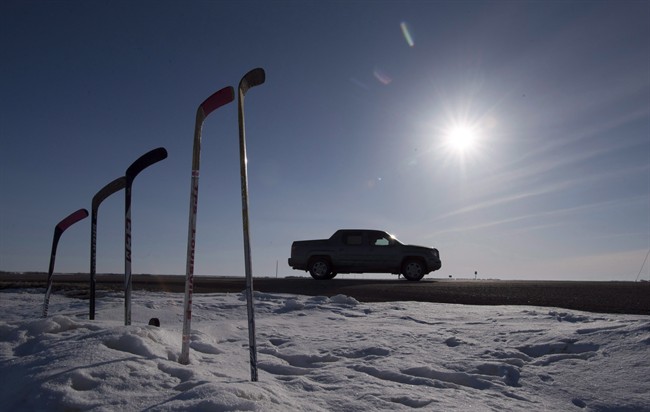 Hockey sticks to remember members of the Humboldt Broncos are silhouetted against the morning sun along a stretch of highway 6 in Saskatchewan, Friday, April 13, 2018. (THE CANADIAN PRESS/Jonathan Hayward)

COLONSAY, Sask. — A defenceman who suffered a brain injury in the Humboldt Broncos bus crash last spring was back on the ice for the first time this week.

Layne Matechuk, 18, was injured in April when a transport truck and the bus carrying his junior hockey team collided at a rural intersection in Saskatchewan.

The crash killed 16 people, including 10 players, and injured 13.

Matechuk’s father, Kevin, posted an online video Tuesday of his son skating while pushing a hockey net and another of him shooting a puck.

“After 9 months @LayneMatechuk returned to the rink to skate for the first time since the accident,” he wrote on Twitter. “Could not be more proud of Layne!”

Matechuk, who is from Colonsay, Sask., wore his Broncos jersey —No. 28 — in the video.

His family said in a statement in September that Layne was getting stronger every day, but was struggling to get his speech back.

The family also said he was working on getting more movement in the right side of his body. At that time, they said his leg was “pretty good” but tremors persisted in his right hand.

An earlier statement from the family in June said Matechuk had been in a coma for a month.

The team was on its way to a Saskatchewan Junior Hockey League playoff game against Nipawin when the crash happened April 6.

His lawyer explained Sidhu didn’t want to make things worse for the families involved by putting them through a lengthy trial.

A sentencing hearing for Sidhu has been set for Jan. 28. The Crown prosecutor has said it’s expected to take up to five days.