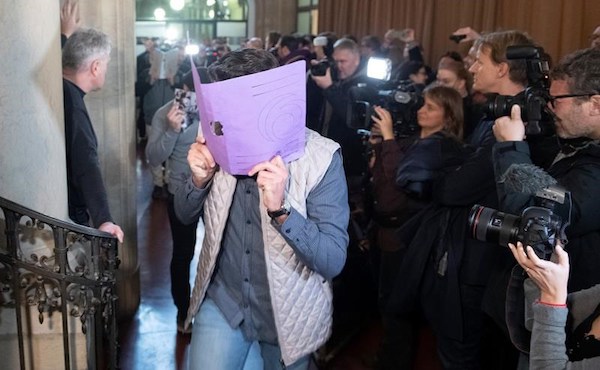 A defendant covers his face when arriving at the court in Berlin, Germany, Thursday, Jan. 10, 2019 for the first day of the trial over the brazen theft of a 100-kilogram (221-pound) Canadian gold coin from a Berlin museum. The “Big Maple Leaf” coin, worth several million dollars, was stolen from the Bode Museum in March 2017. (Paul Zinken/dpa via AP)

BERLIN — Four young men went on trial in Germany on Thursday over the brazen theft of a 100-kilogram Canadian gold coin that disappeared from a Berlin museum two years ago.

Two brothers and their cousin, identified in German media as 24-year-old Wayci Remmo, 20-year-old Ahmed Remmo and 22-year-old Wissam Remmo, are accused of stealing the “Big Maple Leaf” coin from the Bode Museum in March 2017.

The fourth suspect, identified only as 20-year-old Dennis W., worked as a security guard at the museum, which is located in the heart of the German capital. He is accused of scouting out the scene of the crime.

The opening of the trial at Berlin’s district court drew intense media interest in Germany because of the Hollywood-style nature of the heist and their families’ alleged ties to organized crime.

Prosecutors believe that the Remmos smashed a protective case and then managed to lift the coin out of a museum window before fleeing along a rail track with their haul in a wheelbarrow. They are suspected of later cutting up the coin, valued at about $5.3 million, and selling the pieces.

The men’s lawyers have denied the accusations levelled against their clients and accused prosecutors of presenting no evidence linking them to the theft.

If convicted, the men could face up to 10 years in prison for serious theft, though the three youngest defendants may be sentenced as juveniles because they were under 21 at the time of the crime.