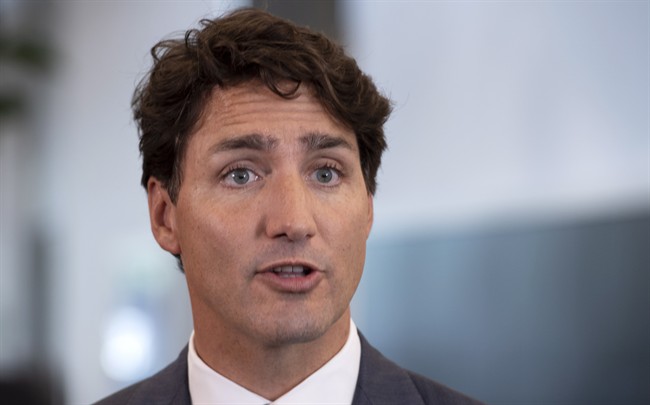 Prime Minister Justin Trudeau responds to a few questions following a meeting with a group of businessmen in Longueuil, Que. on Tuesday, August 28, 2018. (THE CANADIAN PRESS/Paul Chiasson)

OTTAWA — The Liberals will reimburse $500 to the House of Commons for using Prime Minister Justin Trudeau’s parliamentary office to record a video pitch for donations to the party.

Liberal national director Azam Ishmael says the party is also offering to reimburse people who made donations linked to that video.

The move comes after New Democrat MP Charlie Angus complained to the board of internal economy — the multi-party body that oversees the operation of the Commons — that the video violated Commons rules, which prohibit the use of parliamentary resources for partisan purposes.

In a letter to the chief of staff of Commons Speaker Geoff Regan, who chairs the board, Ishmael says the end-of-year message from Trudeau was recorded using equipment “paid for and owned by the Liberal Party of Canada, and not with parliamentary resources, equipment or expenditures.”

Nevertheless, he says “out of respect for full compliance” with the rules, the party has decided it would be “appropriate” to reimburse the Commons for the use of the prime minister’s office as a backdrop.

Based on the cost of using similar spaces for short video recordings, Ishmael says the party estimates that $500 would be an appropriate amount.

The NDP caucus “has still not repaid the entire $2.7 million that they owe” the Commons for using MPs’ parliamentary budgets to defray the costs of satellite party offices in Quebec and elsewhere, Ishmael says in the letter.

He goes on to list six videos recorded by Conservatives in parliamentary offices or hallways, soliciting donations or promoting their party.