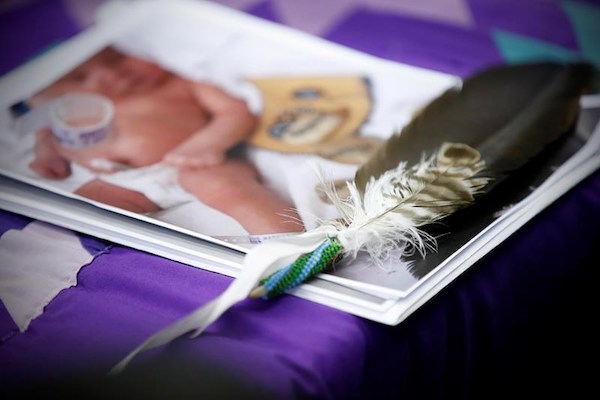 An eagle feather and a baby hospital ID bracelet sit on a photo of a newborn baby during a press conference in support of the mother who’s newborn baby was seized from hospital by Manitoba’s Child and Family Services (CFS) at First Nations Family Advocate Office in Winnipeg on Friday, January 11, 2019. (THE CANADIAN PRESS/John Woods)

WINNIPEG — Two social media videos show a newborn baby girl being taken from the arms of her Indigenous mother by Manitoba social workers and police — an apprehension that First Nations leaders say is all too common in a child-welfare system biased against Aboriginals.

The videos, broadcast live Thursday on Facebook by the woman’s uncle, show her sitting in a hospital bed, cradling her baby and rocking back and forth as social workers and police explain that the baby is being taken into care.

The woman is crying softly and being hugged by relatives, one of whom is wailing in sorrow. Eventually, police place the newborn into a car seat and take her away.

The mother is not told when she might see her baby again.

“The video itself was disturbing and raised a number of questions, obviously, for anybody who saw it,” Indigenous Services Minister Jane Philpott said in an interview Friday.

“It certainly begs the question as to whether or not this family was treated in a way where the unity of the family and the bond between parent and child was respected as something that had to be taken into serious consideration.”

Statistics from the Manitoba government show newborn apprehensions occur, on average, about once a day in the province. About 90 per cent of kids in care are Indigenous.

The video segments, which had been viewed more than 400,000 times by Friday afternoon, offered a rare glimpse into a normally private matter. They also display a biased child welfare system, according to Indigenous leaders.

“The system that we’re subject to is not a system for our people,” Grand Chief Garrison Settee, who represents northern Manitoba First Nations, said Friday at a news conference with the mother, her family and other community leaders.

The woman, her baby, and other family members cannot be identified under Manitoba law.

The baby was taken away because of a false accusation that the mother was drunk when she arrived at the hospital to give birth, the woman’s aunt said.

The videos show family members telling social workers the accusation was not true. They ask whether the baby could stay with one of them instead of being taken away. The request is denied.

All the while, the mother is sitting on her hospital bed, cradling her baby. She recalled getting strength from her infant daughter.

“I was blindsided … and it’s just astonishing how far this had to go,” she said.

“When I was holding my baby, she was actually the one who was keeping me content and strong and focused. And I’m still holding on to that.”

Cora Morgan, a family advocate for the Assembly of Manitoba Chiefs, said the mother may have been targeted for a “birth alert” — a note to social workers that an expectant mother is high risk — because she had another daughter who was temporarily in care several years ago.

The woman had previously sought help for addictions and with parenting from Child and Family Services, Morgan said, but was not intoxicated when she arrived at the hospital to give birth.

The General Child and Family Services Authority, which oversees the social workers involved, would not reveal details of the case Friday, but stood by its decision.

“Apprehending a child is a very difficult decision, and is done only as a last resort and when required to ensure children are kept safe,” authority chief executive officer Debbie Besant said in a written statement.

“I have personally reviewed this file in detail and met with the agency staff involved, including the director of the agency. I am confident in the decisions made.”

The federal government has promised new legislation this year aimed at keeping more Indigenous families together, and Philpott said consultations to date have raised recurring themes.

“One of the specific things that we heard from people is that the emphasis has to be on prevention, and to look for every possible way that we can support families to be together.”

The mother, meanwhile, is optimistic she might be reunited with her daughter shortly. The case file has been transferred from Winnipeg to an agency in the woman’s home community.

“I’m very hopeful things are going to work out in a positive way.”