By Alanna Rizza and Michelle McQuigge, The Canadian Press 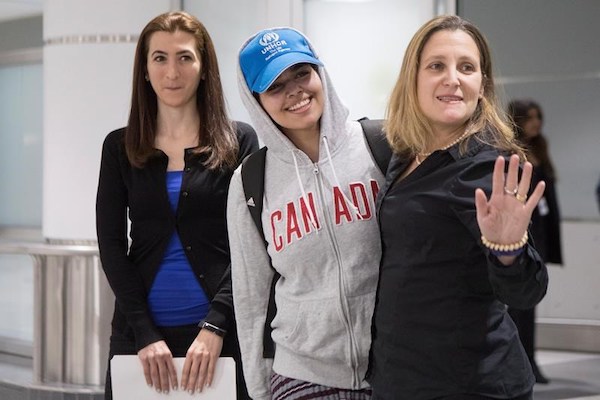 TORONTO — A Saudi teen described as a “brave new Canadian” by an official from the government that granted her refugee status as she fled her allegedly abusive family is en route to her new home, Canada’s Foreign Affairs Minister said Saturday.

Chrystia Freeland appeared alongside 18-year-old Rahaf Mohammed Alqunun with her arm around the teen as she appeared briefly at Toronto’s Pearson International Airport.

Alqunun, fresh off a flight from Seoul, South Korea, and sporting a grey “Canada” hoodie and a blue hat emblazoned with the logo of the organization that arranged for her resettlement, smiled and waved at a group of reporters, but offered no comment on her arrival.

Freeland, however, heaped praise on the young woman who shot to fame through her social media campaign to flee her family.

“It was a pleasure for me this morning to welcome to her new home a very brave new Canadian,” Freeland said. “… she wanted Canadians to see that she’s here, that she’s well, and that she’s very, very happy to be in her new home, although she did comment to me about the cold.”

Alqunun gained international prominence when she fled her family last week while visiting Kuwait and flew to Bangkok, where she barricaded herself in an airport hotel and launched a Twitter campaign outlining allegations of abuse against her relatives.

Alqunun said her father physically abused her and tried to force her into an arranged marriage.

Her father, who arrived in Bangkok not long before she left, has denied those allegations.

“I’m the girl who ran away to Thailand. I’m now in real danger because the Saudi Embassy is trying to force me to return,” said an English translation of one of her first posts to Twitter. Alqunun also wrote that she was afraid and that her family would kill her if she were returned home.

The Twitter hashtag #SaveRahaf ensued, and a photograph of her behind a door barricaded with a mattress was seen around the world.

Trudeau announced Friday that the United Nations High Commissioner for Refugees asked the federal government to allow Alqunun to settle in Canada, and Ottawa agreed.

“That is something that we are pleased to do because Canada is a country that understands how important it is to stand up for human rights, to stand up for women’s rights around the world,” Trudeau said.

The UNHCR said Alqunun’s plight has captured the world’s attention and provided a glimpse into the situation of refugees worldwide.

Spokeswoman Lauren La Rose praised Canada’s willingness to step up and assist in this case, but noted that Alqunun’s situation highlights a need for more interventions around the world.

“Canada has been a great ally and leader in this area, but there needs to be more spaces so that women and girls or anyone that is vulnerable can find a safe third country to resettle in,” La Rose said.

But the move to accept Alqunun could serve to heighten tensions between Canada and Saudi Arabia.

In August, Saudi Crown Prince Mohammed bin Salman expelled Canada’s ambassador and withdrew his own envoy after Freeland used Twitter to call for the release of women’s rights activists who had been arrested in the country.

The Saudis also sold Canadian investments and recalled their students from universities in Canada.

But Trudeau appeared unfazed by the possibility that the move could have ill effects, repeating that Canada stands up for human rights regardless of diplomatic consequences.

“This is part of a long tradition of Canada engaging constructively and positively in the world and working with our partners, allies and with the United Nations,” he said.