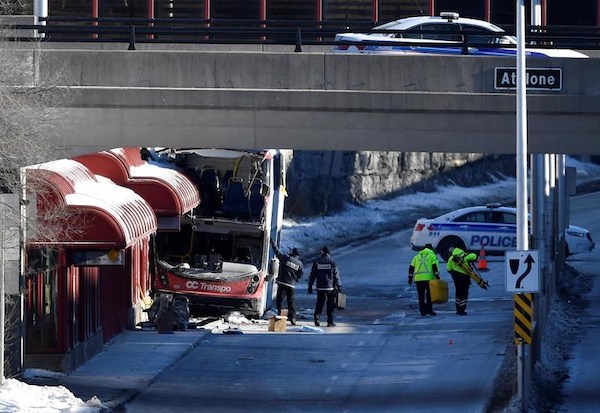 Officials from Transport Canada look at the scene where a double-decker city bus struck a transit shelter at the start of the afternoon rush hour on Friday, at Westboro Station in Ottawa, on Saturday, Jan. 12, 2019. (THE CANADIAN PRESS/Justin Tang)

OTTAWA — The investigation into a deadly bus crash on a busy Ottawa route will not yield answers quickly, the city’s police chief said Saturday as he cautioned the public not to jump to conclusions about the events leading up to the collision.

Charles Bordeleau said officers have plenty of work ahead of them as they probe the Friday afternoon collision that killed three and injured 23 others.

The double-decker bus operated by local transportation agency OC Transpo hopped a curb and struck a transit shelter at about 3:50 p.m. just as rush hour began. It plowed along a station platform and into the overhanging roof of the transit shelter, which carved deep into the vehicle’s upper level and crushed a number of seats.

The majority of the patients injured in the crash have been released from hospital, police said, with just one remaining in critical condition while six are listed as serious and four are considered stable.

Bordeleau cautioned that answers will be slow in coming as the police tackle a mammoth investigation.

“There were 90 people on the bus, we have to speak to all of them,” Bordeleau said at a Saturday afternoon news conference.

“It’s a slow, painstaking process. Our goal is to ensure that we get it right.”

On Saturday evening, more than 24 hours after the collision, police finished documenting the scene and re-opened nearby roads.

The area looked different a day earlier, when Jack Mailloux was cycling home and happened upon the scene of the accident.

Road blocks and dozens of emergency vehicles made it clear the incident was not minor, he said.

“I live in Carlingwood and that’s my bus stop when I’m not biking. So it’s quite a concern.”

While the cause of the crash is still unknown, Mailloux said he has often noted the express buses travelling through the area at high speeds. This particular bus was not scheduled to stop at the Westboro station, which is another aspect being probed in the investigation.

Mailloux says his first thought was for his wife and son, who were scheduled to be travelling through the area shortly after the crash.

“I was making sure where my family was. And when I got home I got a call from my daughter who said, ‘It’s good to hear your voice, Dad.'”

The bus was at or near its full capacity at the time of the collision, Bordeleau said Saturday. Sgt. Cameron Graham, of the force’s collision investigation unit, said investigators would conduct multiple drone flights over the scene of the wreckage, as well as gather data from the vehicle itself and any available video surveillance.

The badly damaged bus remained in place for much of the day Saturday as investigators combed for clues. This meant ongoing road closures and detours in the surrounding area. The bus was finally towed away from the Westboro station late Saturday afternoon, about 24 hours after the collision.

The bus driver, initially arrested hours after the crash, has since been released unconditionally pending further investigation.

“It’s important that the public does not read into the fact that she was arrested,” Bordeleau said. “The reasons why we arrested her are part of the investigation, we’re not going to get into that, but our investigative unit is out there collecting all the evidence and then we’ll see where it takes us.”

The police chief also backed away from previous reports that two of the those killed were passengers on the bus, while the third was killed on the platform of Westboro station. Bordeleau said new information has surfaced to challenge that account, but did not provide further details.

Ontario’s Ministry of Transportation and Transport Canada remain involved in the investigation, he added.

Shortly after the crash, neither Bordeleau nor Ottawa Mayor Jim Watson would speculate on why the bus had left the road. Despite mid-afternoon temperatures of about minus-15, it had not snowed in Ottawa Friday and the busway is treated as a top priority for the city’s snowplows, salters and sanders.

Watson publicly thanked the many politicians at various levels of government for their calls of support “as our city continues to cope with the tragic events of the past 24 hours.”

This is the second deadly collision involving a double-decker bus in Ottawa in the last six years.

In 2013, another Ottawa double-decker bus broke through a warning gate and collided with a Via Rail train in Barrhaven, killing six people as the train sheared off the front of the vehicle. The investigation into that case found the cause was a combination of excessive speed, a difficult curve before the tracks and driver distraction.

—With files from Michelle McQuigge, Jim Bronskill and Jordan Press.