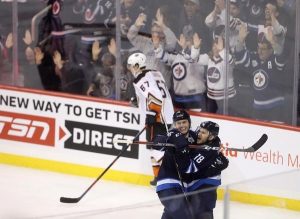 WINNIPEG — This time Bryan Little scored the game-winner with the spotlight on him.

The Jets forward found the back of the net off a rebound at 4:49 of overtime Sunday to lift Winnipeg to a 4-3 victory that extended the Anaheim Ducks’ losing streak to 11 games.

“Tonight definitely wasn’t an easy one, though,” said Little, who also recorded the winner in the second period of a 4-2 victory over Detroit last Friday.

“(Anaheim is) a desperate team and they played that way and it made it a really hard night for us. No part of that game is easy.”

Connor Hellebuyck made 28 saves for Winnipeg, which is 5-2-0 in its last seven games.

“(The Ducks) came in here guns blazing,” said Wheeler, who scored on the power play.

“Obviously, it hasn’t been easy for them lately and they’ve got a lot of guys who have won a lot of games in this league and came out really hard and made it tough on us.”

It’s the longest string of defeats (0-7-4) in Anaheim’s history, but a statement released by the team after the game said head coach Randy Carlyle’s job is safe for now.

“While it’s not my preference to make comments on this topic during the season, our recent play has led to many questions. Our fans are frustrated, rightfully so, and deserve a response from me,” Bob Murray, Anaheim’s executive vice-president and general manager, said in the statement.

“At this time, I am not considering a coaching change. I am more focused on our players, specifically with who is going to step up in this situation. The way we played tonight was a step in the right direction, but we need much, much more. We have higher expectations for this group and they should expect more from themselves.”

John Gibson stopped 30 shots for the team, which was starting a five-game road trip.

Carlyle said the Jets got some “lucky bounces” and benefited from a missed slashing penalty by the Jets’ Mark Scheifele on Cam Fowler in overtime, but he thinks his team can get out of its funk.

“You just have to multiply and duplicate efforts like tonight,” Carlyle said. “Because if we do that, we’ll have success. And I think we can do some things better.”

Fowler said the team did a lot of “great” things against the Jets.

“Obviously, now with the stuff that we’re going through, people are only looking at the results,” he said. “But we came in here, we played a great road game. If we continue to do that and we continue to put forth the effort we did tonight, then we’ll climb our way out of this thing.”

Chiarot tied the game 3-3 at 14:05 of the third with a bouncing shot that went off a stick.

Anaheim led 2-1 after the first period and 3-2 after two.

Gibbons scored his first goal of the season at 2:19 of the opening frame when his pass attempt to Ryan Kesler at the front of the net went off Chiarot’s skate and past Hellebuyck. Rakell blasted a high shot into the net at 16:14 to make it 2-0.

Jets forward Kyle Connor stood in front of Gibson to partially screen the goalie for Wheelers’ ninth goal of the season with 1:00 left in the period.

Laine, playing in his 200th NHL game, took a cross-ice pass from Little and one-timed his 25th goal of the season past Gibson to tie it 2-2 at 2:24 of the second.

It was Laine’s first goal in seven games and fourth in 20 games. While the 20-year-old Finnish sniper recently talked about struggling to score, he still became the seventh player in NHL history to record three seasons of 25 or more goals before their 21st birthday.

Anaheim regained the lead after Cogliano went around the back of the net with the puck and fired a sharp-angled shot that went under Hellebuyck at 15:48. Cogliano has a goal and two assists in a three-game point streak.

Little and Scheifele both extended point streaks to five games and each have seven points in those spans.