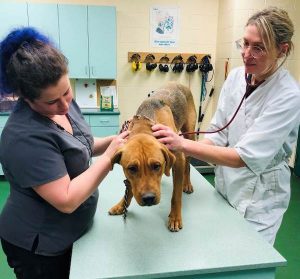 Animal care workers assess one of the dogs rescued from a Winnipeg home on January 4. (WPS / HANDOUT)

A Winnipeg woman is facing multiple animal cruelty charges after police found 15 dogs malnourished and in distress in a city home.

Police were responding to an unrelated call in the 700 block of Home Street on January 4 when they noticed a strong smell coming from the residence.

They approached the home and saw dogs barking and clawing at the window.

The dogs were found to be living in deplorable conditions with no food or water and a substantial build-up of urine and feces.

Leland Gordon, chief operating officer of the Animal Services Agency, says the situation is one of the worst his department has ever seen. He added the dogs began to eat parts of couches, beds and walls. Once the animals were rescued, Gordon says they defecated pieces of drywall as a result.

Gordon says there were several puppies among the dogs seized, with one of them displaying an ulcer on its eye. The animals have since been assessed by veterinarians, given baths and had their nails clipped.

During a news conference Monday at police headquarters, one of the dogs, named “Hope,” was present with an animal care officer. Once the dogs are given a clean bill of health, they will be placed up for adoption through the Animal Services Agency. 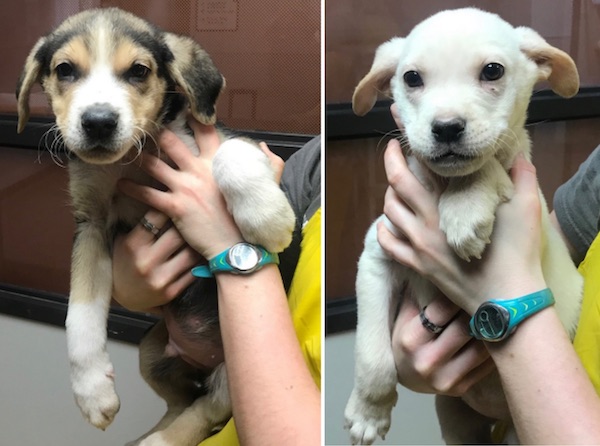 Two of the 15 dogs rescued with the help of Winnipeg police on January 4. (WPS / FACEBOOK)

Crystal Marie Molloy, 35, was arrested this past Saturday in the Richmond West area. She was charged and released on a promise to appear.

In Winnipeg, residents are permitted to own up to four dogs. Those suspecting a case of animal cruelty can call the provincial animal care line at (204) 945-8000 or visit mb.211.ca.