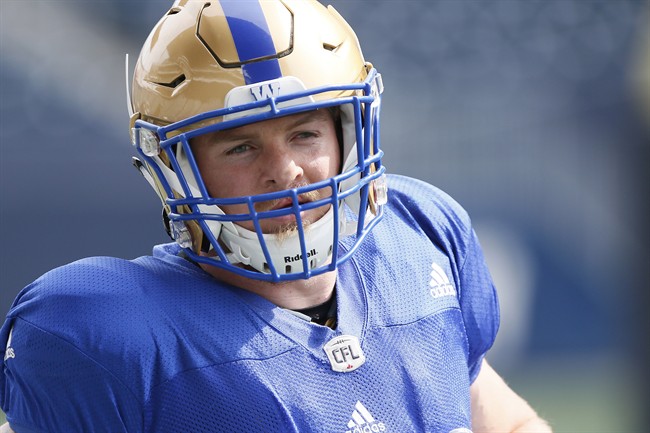 New addition to the Winnipeg Blue Bombers Adam Bighill (50) runs through drills at a pre-season training camp in Winnipeg, Thursday, May 24, 2018. (THE CANADIAN PRESS/John Woods)

The Washington state native recorded 105 tackles while adding four sacks, four tackles for loss, a fumble recovery, two interceptions (one returned for a touchdown), and a league-leading four forced fumbles. His 127 defensive plays were the third-most in the league last season.

“It was pretty well documented that going into this offseason, re-signing Adam was a very big priority for us,” said Blue Bombers general manager Kyle Walters.

Bighill was to become a free agent next month.

“We were able to get discussions going and once we did, things moved well and I think both sides are comfortable with the agreement and excited about the future. Adam is a heck of a football player, a great leader, and we’re thrilled to keep him in Winnipeg.”

Prior to joining Winnipeg at the onset of training camp last season, Bighill had spent the previous season in the NFL with the New Orleans Saints. He played six seasons with the BC Lions (2011-2016) prior to joining New Orleans following the 2016 season. Bighill is a five-time CFL All-Star and six-time Western Division All-Star.

Bighill will also be joining Wellington-Altus Private Wealth in the off-season as an investment advisor.