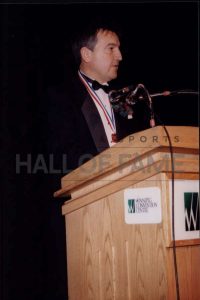 The University of Winnipeg Wesmen will induct the fourth member of the inaugural Wesmen Ring of Honour class later this month.

Burchuk coached the women’s team from 1980-89, guiding the program to six straight national championships. During his tenure, he was also named the CIAU national coach of the year four times.

Burchuk will join Diane Scott, Sandra Carroll and Tom Kendall from the Wesmen family in the Ring that overlooks the Dr. David F. Anderson Gymnasium.

All Wesmen volleyball alumni are invited to the January 24 matches and will get in free of charge. The ceremony will begin at 7:45 p.m.