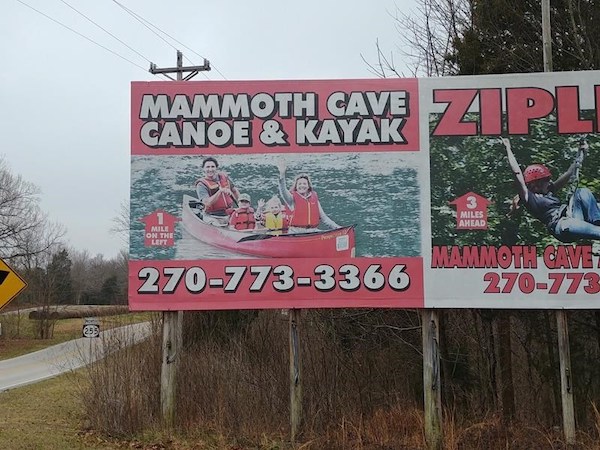 A billboard showing Prime Minister Justin Trudeau with his wife Sophie Gregoire Trudeau, and their children Xavier and Ella-Grace, is seen in Kentucky in this recent handout photo. The last thing you might think you’d stumble onto on a rural road in central Kentucky is Prime Minister Justin Trudeau. Chances are many of the people who pass by the intersection where Mammoth Cave Road meets Old Mammoth Cave Road, don’t even notice that they did. (THE CANADIAN PRESS/HO)

OTTAWA — You might think the last thing you’d stumble onto on a rural road in central Kentucky is Prime Minister Justin Trudeau.

But there, on the right side of the road, about two hours south of Louisville at the edge of a national park, is a giant billboard advertising the Mammoth Cave Canoe and Kayak operation, one mile ahead on the left. And the photo on the billboard, of a smiling family of four in a canoe, is clearly the Canadian prime minister, his wife, Sophie Gregoire Trudeau, and their two oldest children, Xavier and Ella-Grace.

They are in a red canoe, all clad in life jackets, and Sophie and Ella-Grace are waving.

A call to Mammoth Cave Canoe and Kayak went unreturned Wednesday, but a man who owns a cabin rental operation across the street from the billboard confirmed its existence. He said he hadn’t looked at it that closely before and was surprised to learn it featured Trudeau.

The billboard photo wasn’t there in June 2015, when Google captured an image of the spot for its Google Street View page. But it has been there since at least 2016, when an observant Facebook user spotted the sign and posted about it in French.

Another person mentioned the billboard on Twitter last June.

But the story seemed to take on more legs Wednesday after a Reddit user posted a photo of the billboard captioned, “Did you ever hear about our Trudeau billboard down here in Kentucky. We haven’t quite learned not to steal pictures from the Internet yet.”

It prompted Trudeau to tweet a response. “For the record: This was taken in Yukon in 2013. A spectacular part of this country to explore.”

Trudeau originally tweeted the photo himself in August 2013 when he announced he and his wife were expecting their third child.

“Thrilled to let you know we’re going to need another seat in our canoe: Sophie is pregnant! #threeisthenewtwo,” he posted, more than two years before he would become prime minister.

When it comes to advertisers nabbing internet photos of unwitting politicians, Trudeau was portrayed in a somewhat more flattering light than Conservative MP Michael Chong.

In 2017, a Canadian woman noticed a photo of Chong was being used in a poster campaign in Guatemala advertising sanitary bathrooms.