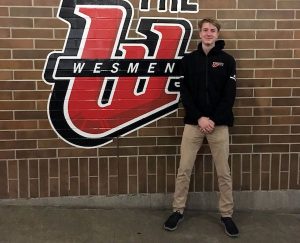 WINNIPEG — The University of Winnipeg Wesmen have recruited Liam Kristjanson to their men’s volleyball squad for 2019-20.

The towering 6’9″ left side comes to the Wesmen from Crocus Plainsmen high school and the 204 Volleyball Club.

“He had really good size. I watched him practice and he was over the net in a really large way,” said head coach Larry McKay.

“He’s already got the size and he may be growing still. He’s long as well as tall and he’s a good jumper, and he hits with a pretty high contact. And he seems like he’s an excellent student, which is also a big deal when you’re recruiting someone for over the course of five years.”

Kristjanson had his pickings for where to continue his career as a student-athlete, having discussions with UBC-Okanagan, Saskatchewan, Manitoba and Brandon.

“The most important thing for me was finding the right coach and Larry’s an excellent coach, he’s been in the Wesmen program for more than 30 years,” Kristjanson said.

“He’s turned out a great number of athletes who have played for the national team, which is where I want to end up eventually. His team’s been consistently competitive and he’ll get the best out of the talent he has and I think those are great attributes for a coach.”

Kristjanson’s studies will see him enroll in the Faculty of Applied Computer Science.