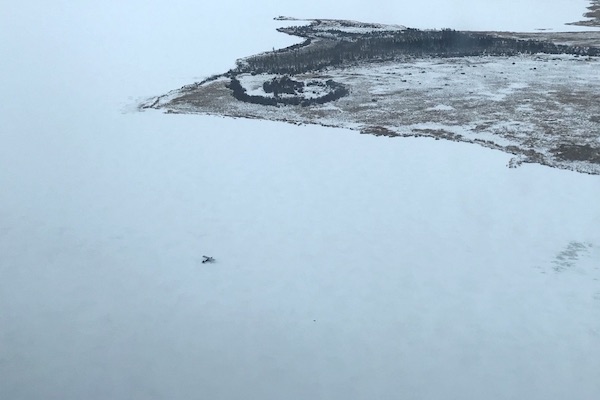 A plane sits on Pickerel Lake after rescue crews spot the scene where a Manitoba pilot was stranded, Monday, January 14, 2019. (RCMP HANDOUT) 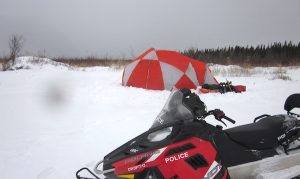 RCMP reached the man by snowmobile after a 45-minute trip and found him to be in “good spirits.” (RCMP HANDOUT)

An overdue pilot was rescued Monday after his plane experienced mechanical issues and left him stranded on a Manitoba lake.

The 71-year-old Ashern man departed Sunday morning to a camp at Sisib Lake, south of Grand Rapids, but never made it to his destination.

RCMP and the Joint Rescue Coordination Centre used a Hercules to search the area, where a small fire was spotted on Pickerel Lake Monday morning. Search and rescue crews from the Canadian Armed Forces were unable to parachute to the man’s location due to weather, but requested RCMP reach the spot by snowmobile to investigate.

RCMP and other emergency crews travelled approximately 45 kilometres by snowmobile to the scene of the fire. During that time, the weather cleared to allow two SAR techs to parachute down just after 6:30 a.m. The pilot was found to be in good spirits, but suffering from dehydration. He was provided medical treatment and recovered on site.

RCMP say the pilot landed safely on the lake, but was unable to start his plane again to leave.

RCMP, Canadian Rangers and Manitoba Sustainable Development reached the scene by 2:30 p.m. A helicopter picked up the SAR techs and the pilot at 4:30 p.m.