By Giuseppe Valiante, The Canadian Press 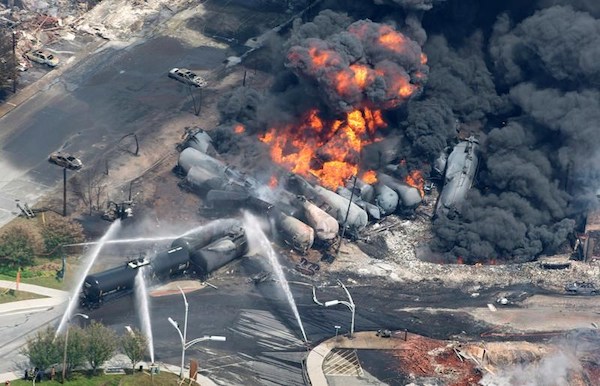 MONTREAL — Netflix is refusing to remove from its hit movie “Bird Box” footage of the rail explosion that killed 47 people in Lac-Megantic, despite an appeal from the town’s mayor.

But the streaming company has said it will ensure no future productions on its platform use images of the disaster for entertainment, according to Lac-Megantic Mayor Julie Morin, who spoke to a Netflix representative Thursday.

Meanwhile, the head of the company that sold the images of the Lac-Megantic disaster to the producers of “Bird Box,” said he is “devastated” by the way the footage was used.

“We didn’t do all we could on our end to make sure that people understood the sensitive nature of the content, because what happened is not appropriate,” Jason Teichman, the CEO of New York City-based Pond5, said in an interview Thursday.

Morin said in a statement she is satisfied Netflix has “committed to reflect with their partners on the use of images so that this situation is not repeated.” She said she “sensed a sensitivity to the recovery of our citizens.”

Town spokeswoman Karine Dube said the Netflix representative called the mayor unsolicited Thursday morning and told her the company would not be removing the images from “Bird Box.”

At least two dramas currently on Netflix’s Canadian platform, including “Bird Box,” briefly use actual footage of the 2013 derailment. Morin told The Canadian Press Tuesday that she wanted the company to review its catalogue and remove the images. She said use of the videos showed a lack of respect and had upset residents, many of whom are suffering post-traumatic stress.

Pond5 sold footage of the burning town to “Bird Box” and another Netflix production, “Travelers.” Teichman said his company doesn’t hold the rights to the 14 million video clips in its global content catalogue, which is accessible through its website. Rather, he said, Pond5 licenses footage from people such as historians, filmmakers and journalists and splits the revenue 50-50 when the images are sold.

He wouldn’t say who shot the Lac-Megantic video, citing privacy concerns. He said his company has contacted customers who purchased any related clips of Lac-Megantic. It held “very clear conversations so that there was zero ambiguity regarding the sensitive nature of the content so that there can be no room for misunderstanding,” he said.

But he recognized that his company doesn’t control the artistic direction of the people who purchase his content. “We don’t police them, and we don’t censor what they do,” he said. “We’re going to make the efforts to do what we can on our end, to ensure (the footage) is being used as appropriately as possible.”

Netflix spokespeople have declined repeated requests for comment on the controversy.