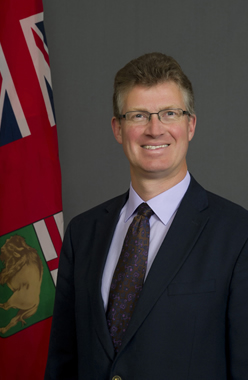 WINNIPEG — A former Manitoba justice minister is aiming to leave the provincial legislature for a seat in the House of Commons.

Andrew Swan, who has been sitting on the opposition benches since the Manitoba New Democrats lost the last election, is seeking the federal NDP nomination in Winnipeg-Centre, a riding currently held by Liberal Robert-Falcon Ouellette.

“Successive Conservative and Liberal governments have really turned their back on the heart of Winnipeg,” Swan told The Canadian Press on Sunday.

Swan cited issues such as poverty and the rising use of methamphetamines as issues that need to be addressed. The time is also right, personally, for him to be able to make the jump to Ottawa.

“My girls are 20 and 18, they’re both at university, so they don’t need me around quite as much as they would have four years ago.”

Winnipeg Centre has a long history of voting NDP. But former New Democrat MP Pat Martin was voted out in 2015 in favour of Ouellette.

Swan said he will retain his seat in the legislature for the time being. If he wins the nomination for the October federal election, he will then decide when to resign.

Swan will face at least one competitor for the NDP nomination. Leah Gazan, a lecturer at the University of Winnipeg and public speaker, has already announced her intention to seek the nomination. A date for the nomination vote has not been set.

If Swan leaves the legislature, he will follow a few other New Democrats who have either recently departed or announced their intention not to run again in the provincial election slated for next year. Kevin Chief, the only New Democrat to get a higher vote percentage than Swan in the last election, stepped down two years ago. Former premier Greg Selinger quit last year. Rob Altemeyer and James Allum have announced they will not run after serving out their current terms.

The departures are not good news for the provincial New Democrats, according to one political analyst.

“It’s part of a generational turnover, I guess … but that’s the optimistic interpretation,” said Paul Thomas, professor emeritus of political studies at the University of Manitoba.

“I think it has more to do with people’s calculations about what the prospects are for the provincial party when the next election occurs.”

Swan was first elected in 2004 and later served as minister of Competitiveness, Training and Trade, then as Justice Minister.

He was one of five senior ministers who openly challenged Selinger’s leadership in 2014. Selinger survived the leadership crisis, and led the NDP into the 2016 election that saw them swept from power after 17 years.

The NDP currently holds 12 of the 57 legislature seats.