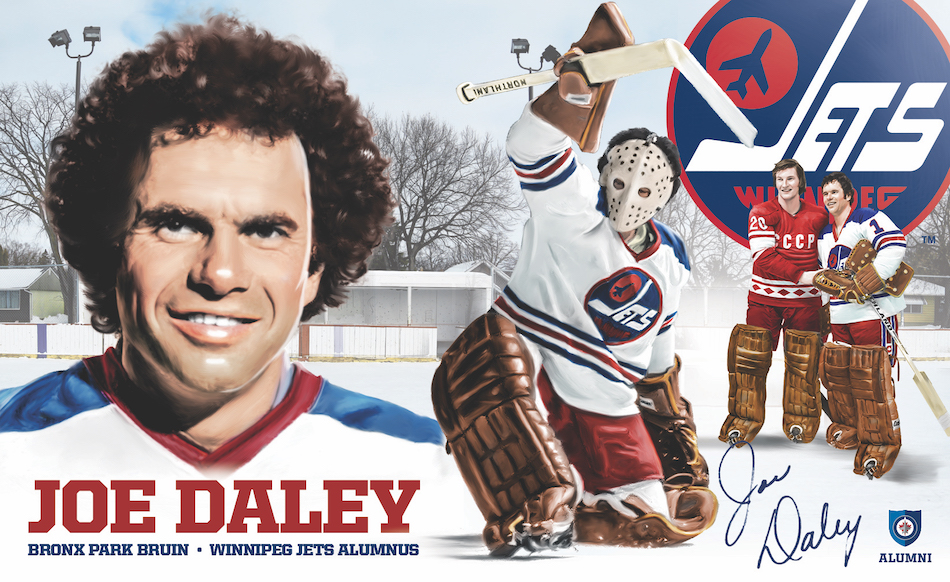 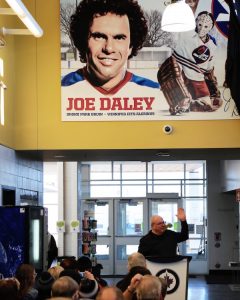 Former Winnipeg Jets goaltender Joe Daley speaks at a ceremony to unveil a mural in his honour on Sunday, January 20, 2019. (TNSE / HANDOUT)

Former Winnipeg Jets goalie Joe Daley was honoured Sunday with the unveiling of a mural at the Bronx Community Centre.

The Winnipeg Jets unveiled the first of a series of historic team murals that will pop up in communities throughout the city to highlight the storied history of the team and its alumni.

Daley is no stranger to the Bronx Community Centre, having played youth sports at the arena up to the juvenile level.

He was also a WHA First Team All-Star in 1976 and is an honoured member of the Manitoba Hockey Hall of Fame.

The Bronx Park Community Club has a storied history in Winnipeg — first operating as a modest facility in the 1950s. In 1964, a larger facility was erected, with further additions and improvements added in 1972 and 1985. At the end of the 2008 hockey season, Bronx Park Community Club was demolished to make way for the present facility which opened to the community in September 2009. The present facility is a 25,000 square foot facility, which includes a gym, multi-purpose room, classrooms, woodworking shop, and sports changing rooms, and is considered an intergenerational recreational, leisure and sports facility.

Sincere thank you to the @NHLJets @JamieThomasTV , Bronx Park CC and the entire True North team for the amazing mural of Joe now on display in Bronx Park. pic.twitter.com/ALTcn3K3O0