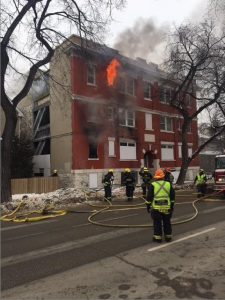 Firefighters battle a blaze at an apartment complex in the 400 block of Maryland Street on Monday, January 21, 2019. (@CITYOFWINNIPEG / TWITTER)

Winnipeg firefighters battled a blaze in a three-storey apartment complex Monday afternoon at the same location they attended last week.

Emergency crews responded to the 400 block of Maryland Street at around 2:20 p.m.

Crews entered the building, but had to leave and fight the fire defensively due to the conditions.

The Winnipeg Fire Paramedic Service says one neighbouring home was evacuated as a precaution.

Crews are expected to remain on scene into the evening.