250 Passengers Stranded Aboard Airplane in Frigid Labrador for 16 Hours 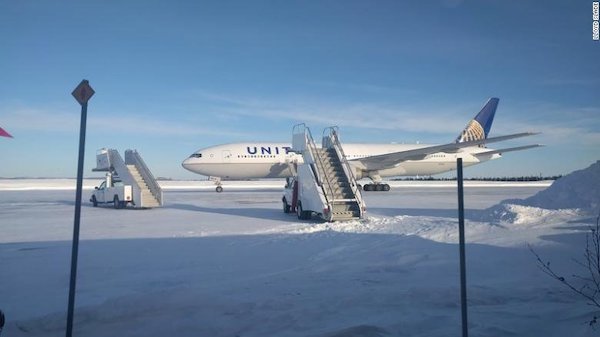 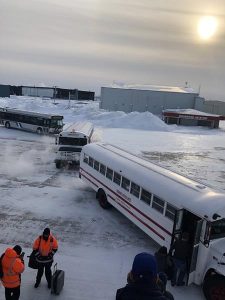 Passengers leave a plane and board buses to change planes in Happy Valley-Goose Bay, N.L., on Sunday, Jan. 20, 2019. (THE CANADIAN PRESS/HO – Sonjay Dutt)

HAPPY VALLEY-GOOSE BAY, N.L. — An end is finally in sight for passengers who spent 16 gruelling hours on a plane grounded on a tarmac in frigid Happy Valley-Goose Bay, N.L., though a passenger was left frustrated by the experience and wondering why it took so long to get help.

“You’re cold, you’re tired, you’re hungry,” said Sonjay Dutt, a professional wrestler who was travelling to an event in China.

“I’ve travelled for work pretty much on a weekly basis for the last almost 20 years, and I’ve never experienced something like this.”

United Flight 179 from Newark, N.J., to Hong Kong was diverted to the Goose Bay Airport Saturday night after a passenger experienced a medical emergency, according to United Airlines spokeswoman Natalie Noonan.

She said that after the passenger was removed from the plane and taken to hospital, a mechanical issue with the plane’s door prevented the aircraft from taking off. Noonan believes the door was unable to be shut because it likely froze in the wintry temperatures.

Noonan said passengers weren’t able to get off the plane because there were no border officials working overnight.

As the hours drew on, Dutt said there was little communication between the airline and the 250 passengers stuck on the plane, which became uncomfortably cold as temperatures outside plunged to nearly -30 C.

He chronicled his experience on social media, tweeting out photos and tagging United in several posts.

“At one point you have to roll with the punches. You’re at their mercy,” he said in a phone interview. “You’re just hoping that they can communicate with you as honestly as possible, and I feel like that wasn’t done.”

Dutt said food began to run low, but after about 10 hours, officials delivered food from Tim Hortons to the passengers, and some people were taken to the airport’s customs area to stretch their legs.

Mechanics arrived late Sunday morning and attempted to fix the door while the passengers were still on board. When the door repair proved to be a lengthy process, the tired travellers were moved to a rescue plane, which was supposed to leave for Newark late Sunday afternoon.

Dutt said he’s a frequent flier with the airline and will be looking for answers once he gets back.

“This is unacceptable at all levels,” he said.

In response, Noonan said the company did “everything they could” to make sure the passengers were as comfortable as possible.

United officials will greet the passengers upon their arrival in Newark, she said, and will provide them with compensation — including refunds and vouchers — after their ordeal.

“We absolutely understand the frustration. It is a very unique situation,” she said.

“The airport they landed in was just not equipped to handle everyone that was coming in.”

The Goose Bay Airport could not be reached for comment Sunday.