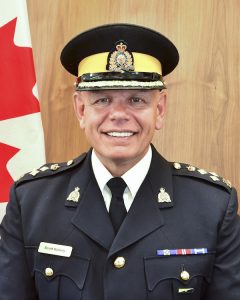 Assistant Commissioner Scott Kolody, Commanding Officer of the Manitoba RCMP, will retire from the force on January 28, 2019. (RCMP HANDOUT)

The commanding officer of the Manitoba RCMP is calling it a career at the end of the month.

Assistant Commissioner Scott Kolody has been with the Mounties for 34 years and in his current role for the past two and a half years.

“Leading the Manitoba RCMP and serving Manitobans has been the most rewarding aspect of my policing career,” Kolody said in a release.

“The work being done by our officers on the front lines, as well as that of our support personnel, is truly exceptional. I have no doubt that the Manitoba RCMP has some of the very best and dedicated employees of any police force.”

“On a daily basis, nearly 1,500 RCMP employees across the province work diligently to ensure safer communities for all Manitobans. It has been an exceptional honour to work alongside them and a privilege to see their incredible commitment to the safety and security of this province.”

Kolody’s last day with the force will be January 28. The new commanding officer will be named at a later date.