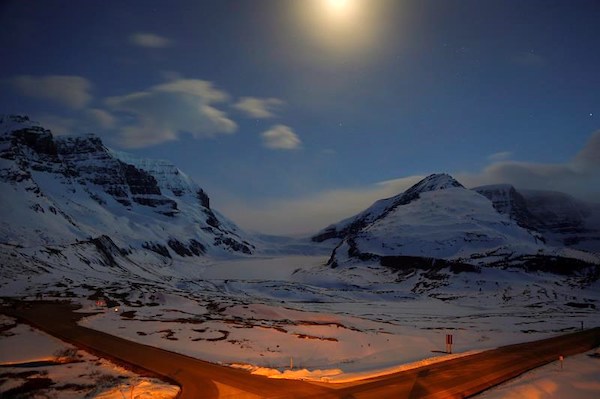 The Athabasca Glacier, centre, part of the Columbia Icefields in Jasper National Park, Alta., is seen in moonlight on May 7, 2014. (THE CANADIAN PRESS/Jeff McIntosh)

Parks Canada says it won’t go ahead with a plan to build a bike trail along the scenic Icefields Parkway that runs through Banff and Jasper national parks.

The federal agency had budgeted about $66 million for the 107-kilometre cycling route from the Jasper townsite to the Columbia Icefields that could eventually extend all the way to the Banff townsite.

“As a result of the initial feedback from the consultation process on the Icefields Trail, there were concerns expressed over the potential environmental impact and also the high cost associated with the project. So the decision was made not to proceed.”

The Icefields Parkway is considered a classic cycling tour, but riders are restricted to its narrow shoulder.

Parks Canada had proposed a separate, paved route buffered from the busy road by 10 to 20 metres of trees.

Environmental groups had voiced serious concerns about the project. They said it would cut through critical habitat for caribou, grizzly bears and migratory birds.

Kecia Kerr, executive director of the Canadian Parks and Wilderness Society for northern Alberta, applauded Parks Canada’s decision not to go ahead with the project.

“The price tag on the trail was really high,” she said. “It was going to be going through some pretty important grizzly bear habitat.”

Kerr said the bike trail was often compared to one in the Bow Valley through Banff National Park.

“It’s really not the same,” she said. “In that area, there is a fence along the highway and so the trail is inside that fence. In this case, there was not going to be a fenced-off trail along the highway.

“It was going to increase the likelihood that people would be winding up face-to-face with grizzly bears … trying to be feeding.”

Parks officials had acknowledged in a 2016 background document that the trail could affect wildlife, pose safety risks and induce further development.

It showed pullouts and rest stops would need to be built every five to 10 kilometres. The trail would have had to be connected by pavement to campgrounds and other infrastructure.

It would have wound through critical habitat for bats, olive-sided flycatchers and two endangered species — the mountain caribou and the whitebark pine.

Officials acknowledged in the document that the trail could create encounters between grizzly bears and cyclists, who are less likely to carry bear spray and who travel quietly at much higher speeds than hikers.

“Some mitigation measures could have relatively significant costs which should be factored into decision-making,” the document said.

The total budget for the project was about $86 million with the parking lots, campsites and washrooms.

Parks Canada said that money will now be spent elsewhere in the national parks system.

“More information will be available shortly on the decisions regarding the reallocation,” said Bouzanis, noting that Jasper has received significant funding for other infrastructure projects in the park.

Kerr said she would like to see the money stay within Alberta’s national parks.

“For example, if some of the funding could go to Waterton where there is great need now for infrastructure funding after the fire, we would certainly applaud that,” she said.

Waterton was devastated by a forest fire in fall 2017 that consumed more than 190 square kilometres of forest, including about 80 per cent of the park’s popular hiking trails.