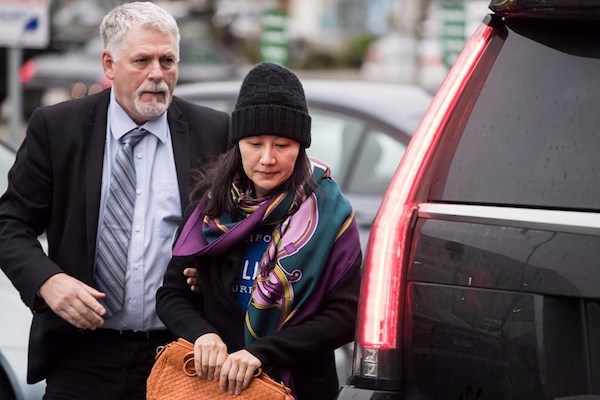 Huawei chief financial officer Meng Wanzhou, right, arrives at a parole office with a member of her private security detail in Vancouver, on Wednesday, December 12, 2018. (THE CANADIAN PRESS/Darryl Dyck)

VANCOUVER — The Canadian government has received a formal request for the extradition of a senior executive of Chinese tech giant Huawei Technologies as a judge in Vancouver agreed to a minor change in Meng Wanzhou’s bail conditions.

If a judge commits Meng for extradition, Justice Minister David Lametti would ultimately determine whether she would be extradited to the United States to face charges of bank fraud, wire fraud and two counts of conspiracy to commit both.

Speaking to reporters in Ottawa, Lametti confirmed that the United States has made an extradition request for Meng, who appeared in B.C. Supreme Court where a judge agreed to replace an individual who provided a surety for her release with a couple who are putting up their home as part of her $10 million bail.

The case will return to court March 6 to discuss Canada’s authority to proceed with the extradition request.

Meng, who is the company’s chief financial officer and daughter of its founder, is free on bail in Vancouver after her arrest Dec. 1 at the behest of U.S. authorities.

Justice William Ehrcke said he is unsure if he’ll be able to continue to hear the case because of the time it could take to conclude.

“I have no idea whether we’re looking at months or years,” he said.

“By the time all the individual’s rights are exhausted they can take a long time,” he added.

“I only will have to make a decision at the end of the process, if and only if there is an actual extradition order. I would have the final say in executing that order, yes.”

The U.S. Department of Justice laid out its case Monday against Meng and Huawei. Both Meng and the company have denied any wrongdoing.

The indictment, based on 23 grand jury allegations, accuses Huawei and Meng of misrepresenting their ownership of a Hong Kong-based subsidiary between 2007 and 2017 in an effort to circumvent U.S. sanctions against Iran.

Meng’s arrest has touched off a political furor marked by days of angry anti-Canada rhetoric from China’s foreign ministry, culminating Sunday in the firing of John McCallum as Canada’s ambassador to China.