Home » The Canadian Press » ‘Who Was the Aggressor?’ Defence Lawyer Argues Bus Driver Went After Passenger

‘Who Was the Aggressor?’ Defence Lawyer Argues Bus Driver Went After Passenger 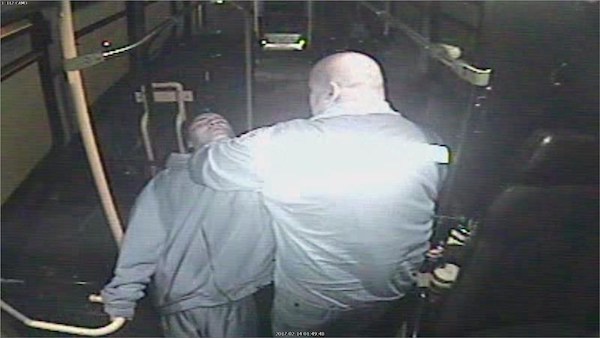 Bus driver Irvine Fraser (right) and passenger Brian Thomas are shown in Winnipeg in this 2017 still image from security video submitted into court as evidence. (THE CANADIAN PRESS/HO – Court of Queen’s Bench of Manitoba)

WINNIPEG — A defence lawyer is arguing that a bus driver stabbed to death in a fight with a passenger could have pulled out the knife that he was eventually killed with.

Roitenberg said it was the 58-year-old Fraser who provoked a violent confrontation by physically trying to remove Brian Kyle Thomas from his bus at the end of a late-night shift.

“Who was the aggressor? Who raised their voice first?” Roitenberg asked during closing arguments on Wednesday.

Thomas, 24, has pleaded not guilty to second-degree murder.

Portions of what happened on the unseasonably warm winter night almost two years ago were captured on security cameras in Fraser’s bus. They show Thomas asking where he is and if he can use a phone.

Fraser tells him to leave the bus more than two dozen times before video shows the driver grabbing the passenger by the neck of his sweater and bending him over backwards before shoving Thomas off the bus.

Crown attorney Keith Eyrikson said Fraser could have responded differently to Thomas’s refusal to get off the bus, but that didn’t justify his getting stabbed. The lawyer said being kicked off a bus should not engender “murderous rage.”

“What Mr. Fraser did … did not justify in any way shape or form (his death).”

Security video shows a passenger throwing punches at Fraser from outside the door after he is kicked off the bus. Eyrikson said the passenger was taunting the driver, spitting at him and calling him names, and trying to get him to fight.

Despite Fraser being much larger — the driver was six-foot-two and 240 pounds while the passenger was five-foot-five with a slight build — Thomas was looking for a conflict, Eyrikson argued.

“He wasn’t afraid of a bigger guy because he had a huge advantage — he had a knife.”

Within a span of seconds after getting off the bus, Eyrikson said, the driver was stabbed multiple times.

The defence did not present any evidence during the trial. During closing arguments, Roitenberg said his client caused the death, but the lawyer questioned whether Thomas was provoked and acting in self defence.

Roitenberg said there was no evidence to suggest his client was the one who originally had the weapon.

He pointed to video footage in which Fraser opens a compartment in the bus in the moments before getting physical with Thomas. Roitenberg also said a shadow in the footage of Fraser getting off the bus and walking towards the passenger was a weapon in the driver’s hand.

Roitenberg told the jury the driver escalated the violence on the bus and then went after the passenger.