By Chris Purdy and Bill Graveland, The Canadian Press 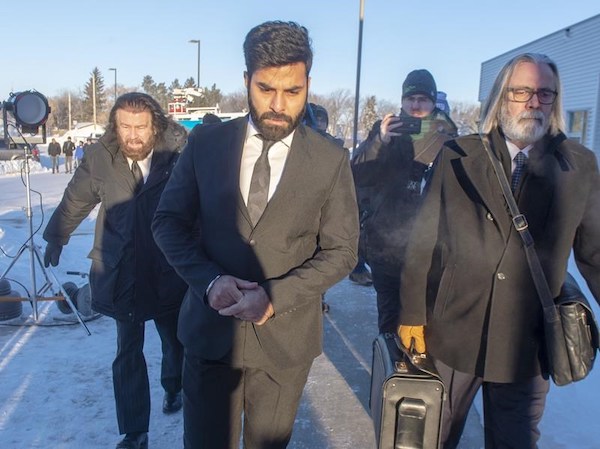 Jaskirat Singh Sidhu, centre, the driver of the truck that struck the bus carrying the Humboldt Broncos hockey team, and his lawyers for the second day of his sentencing hearings Tuesday, January 29, 2019 in Melfort, Sask. (THE CANADIAN PRESS/Ryan Remiorz)

MELFORT, Sask. — As more families stood in court Tuesday to share stories of their unending grief over the dead and the injured in the Humboldt Broncos crash, there was talk of forgiveness but also of incredible anger.

Christina Haugan spoke directly to Jaskirat Singh Sidhu, the truck driver who blew through a stop sign in rural Saskatchewan last April, and told him she holds no ill will.

Haugan’s husband, Darcy Haugan, was head coach of the junior hockey team and was among the 16 people who died on the bus when it T-boned the semi that was stretched across the entire highway. Thirteen players survived, most with serious injuries.

“Jaskirat, your actions while I believe to not be intentional were still incredibly negligent and irresponsible. You had a weapon in your hands in the form of a steering wheel,” she said in her victim impact statement.

But the Christian faith she shared with her husband calls for her to look beyond her grief, she said.

“I want to tell you I forgive you,” she said. “I have been forgiven for things when I didn’t deserve it, so I will do the same.”

Sidhu, a 30-year-old from Calgary, pleaded guilty earlier this month to 29 counts of dangerous driving. He had been driving commercially for about a month and was hauling a load of peat moss.

Families started presenting their victim impact statements on Monday. Some 75 are to be submitted during a sentencing hearing expected to take a week in a makeshift courtroom in Melfort, Sask. More family statements are to come Wednesday.

A Saskatchewan government report was also submitted in court showing that Sidhu had 70 violations of federal and provincial trucking regulations and inspection rules over 11 days prior to the crash.

The report said that had he been stopped for inspection on April 6, he would have been suspended for 72 hours.

The owner of the Calgary trucking company that hired Sidhu was also charged after the crash. Sukhmander Singh of Adesh Deol Trucking has yet to go to trial on eight charges relating to non-compliance with federal and provincial safety regulations.

Sidhu, as well as some of the nine supporters sitting behind him, wiped away tears Tuesday as parents described having to identify the broken bodies of their children in a morgue and how their heartaches will never heal.

Shauna Nordstrom, the mother of 18-year-old Logan Hunter of St. Albert, Alta., said she is haunted by the way her only son died.

“I continue to feel empty and keep Logan’s bedroom door closed so his smell won’t disappear, and while I cry, laying on his bed, I can’t breathe,” she said.

“I feel numb and lost … My life is forever changed.”

Russel Herold of Montmartre, Sask., said he has not been able yet to bury his son, 16-year-old Adam. He often sits with the urn containing his boy’s ashes.

“You have any idea what it is like to hold your six-foot-two, 200-pound athletic son on your lap like I did when he was a baby? Only now he lies in a can? It’s devastating.”

Paul Jefferson billeted rooms in his Humboldt home to Parker Tobin, who was 18 when he died, and 20-year-old Tyler Smith, who was injured. He said he was close with his adopted hockey sons and knew almost everyone on the bus.

“I forgive Mr. Sidhu for his actions that caused so much grief,” Jefferson told court. “In sentencing him, I ask the court to consider that his life should not be ruined forever by his mistake.”

Andrea Joseph of St. Albert, Alta., said calling the crash a mistake makes her want to throw up. She called Sidhu a monster for killing her 20-year-old son Jaxon.

“I despise you for taking my baby away from me,” she said through high-pitched sobs. “You don’t deserve my forgiveness. You shouldn’t have been driving.”

Celeste Leicht of Humboldt said she chose forgiveness following the death of her 19-year-old son Jacob. The mistake she sees is not holding the trucking industry to a higher standard.

“We must learn from our mistakes,” she told court. “There are excellent drivers on the roads who we rely on, who are taking a bad rap for all those who are inexperienced, untrained and allowed to drive.”

She said federal and provincial governments need to do more than they’re doing now.

Last week, the country’s transportation ministers agreed to develop an entry-level national training standard for truck drivers to be in place by 2020. The Saskatchewan government has also introduced mandatory training for semi drivers that is to start in March.